His role in $8b penny stock crash in 2013 was extensive and prolonged, says judge

The "seed funder and finance manager" behind the infamous 2013 penny stock crash was sentenced yesterday to 36 months' jail for intentionally aiding two others in what prosecution called "the most audacious, extensive and injurious market manipulation scheme ever in Singapore".

Four other charges were taken into consideration. The Singaporean was sentenced to 36 months' jail on each proceeded charge, with both sentences running concurrently.

High Court Justice See Kee Oon noted that there is "evidence of extensive losses at unprecedented levels... The sheer magnitude of the market manipulation would also have resulted in serious damage to investor confidence as well as an adverse impact on the stock market and reputational damage".

"In terms of planning and execution, the scheme was sophisticated, systematic and sustained," he said.

He pleaded guilty to creating a false market for Blumont and Asiasons shares between March 18, 2013 and Oct 3, 2013.

Those counters rocketed more than 800 per cent in nine months before crashing on Oct 4, 2013, triggering a rout of penny stocks on the Singapore Exchange.

When the scheme collapsed that month, "the losses that were caused to innocent parties were massive", Deputy Public Prosecutor Nicholas Tan said.

(There is) evidence of extensive losses at unprecedented levels... The sheer magnitude of the market manipulation would also have resulted in serious damage to investor confidence as well as an adverse impact on the stock market and reputational damage.

The prosecution said that as early as 2008, Goh began opening multiple trading accounts at brokerages across Singapore in his name and that of his wife, for Quah and Soh to use. By 2011, he had received and made more than 1,200 payments on behalf of Soh and Quah, from and to a "float" or pool of funds that he managed for them. In total, Goh arranged about $30 million in outgoing payments on their behalf.

Despite Goh's claims to have played a limited role acting on specific instructions, Justice See noted that Goh "did have some measure of autonomy. (The statement of facts) indicates that he managed a pool of funds and was eventually entrusted to arrange for contra trading losses to be paid without needing to seek specific approval from Soh or Quah".

"I do not accept that his role was peripheral. He was clearly entrusted with some authority and powers of oversight, primarily because he was trusted and loyal," Justice See noted.

"The fact that he arranged $30 million in payments cannot be overstated. His involvement was not one-off or sporadic. It was extensive and prolonged."

He also said: "It is clear that the accused was not the mastermind. He did not actually know the full extent or duration of the market manipulation. But what he did know and what he had observed since August 2012 was substantial."

Goh had been told by Quah that she wanted more trading accounts to support the price of BAL's shares. By August 2012, Goh suspected that corporate trading accounts held in the names of companies in which he was a director were being misused. 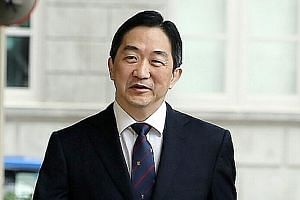 But he failed to take action and continued to aid Soh and Quah.

Justice See added: "The accused elected to plead guilty, albeit at a rather late stage, and credit must be given to him...

"It would appear that he was not motivated by financial gain and had not obtained any pecuniary benefit. He acknowledges he was motivated by wanting to maintain his good working relationship with Quah. I take the view that, to that extent, he did stand to gain in some measure from his involvement."

Goh's decision to plead guilty has sparked speculation over whether he will turn prosecution witness ahead of the trial of Soh and Quah, which starts next Monday.