SINGAPORE - For about a year, foreman Ng Fook Meng paid the bills - of up to a few hundred dollars each month - for a mobile phone line he did not use.

Mr Ng had been instructed by his boss to apply for the line in 2015 and to give him the iPhone and SIM card, with all charges incurred to be reimbursed back to Mr Ng.

Mr Ng, whose name had surfaced a day before in a corruption trial involving former Ang Mo Kio town council general manager Wong Chee Meng, appeared in court on Thursday (Sept 27) to give evidence on the phone line.

The court earlier heard that an M1-registered mobile phone was given by company director Chia Sin Lan, 63, to Wong, 58, when Chia's statement to the Corrupt Practices Investigation Bureau (CPIB) was read out.

Both Chia and Wong are being tried over bribes amounting to more than $107,000, which Chia allegedly gave to Wong over almost two years.

This was in exchange for advancing the business interests of Chia's companies - 19-ANC Enterprise and 19-NS2 Enterprise, which did work such as repairs and redecoration for town councils.

Both companies were awarded contracts and tenders worth millions of dollars by Ang Mo Kio Town Council during the time the alleged bribes took place, the prosecution said.

Mr Ng said on the third day of the corruption trial that he had been asked by Mr Tay Eng Chuan, a director with 19-NS2, to apply for the line, and that he was unaware of who was using the line. 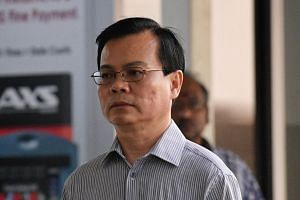 Speaking through a translator, Mr Ng said in Mandarin that he eventually terminated the line after the bills showed that it was no longer being used, and he had asked Mr Tay for permission to do so.

Earlier on Thursday, Chia's lawyer Michael Loh contended that his client had been upfront about his relationship with Wong, and said the two were friends who frequented karaoke clubs and made two trips to China together.

Through the statements given to the CPIB, it did not appear that Chia was trying to distance himself from Wong, said Mr Loh when cross-examining CPIB principal special investigator Keith Peh. Mr Peh had taken Chia's statement in October 2016.

Chia had said in his statement that he is "just friends" with Wong, whom he met some time in 2005 and 2007 when Wong was working at Marine Parade Town Council.

While a handwritten ledger seized from Chia showed expenses that included charges for a mobile phone given to Wong, a sum of $20,000 given to Wong's mistress in China, and meals and other entertainment expenses, Mr Loh argued that these did not suggest there was anything illegal being done as the two men were friends.

The trial is scheduled to resume in November.