SINGAPORE - A former general manager and secretary of Ang Mo Kio Town Council who allegedly took bribes from the director of two building firms was on Wednesday (March 14) charged with corruption.

Wong Chee Meng, 58, who is also known as Victor Wong, faces 55 counts of corruptly accepting gratification worth about $107,000 in total from the director of 19-ANC Enterprise and 19-NS2 Enterprise, in exchange for advancing the business interests of the firms with the town council, according to court documents.

These alleged bribes included overseas remittances to his mistress in China, a job for his daughter-in-law, entertainment expenses at KTV lounges, a $13,500 discount on the purchase price of a car and the use of a mobile phone line.

The alleged offences took place between December 2014 and September 2016.

Wong's alleged co-conspirator, Chia Sin Lan, 62, a director and shareholder of 19-ANC Enterprise and 19-NS2 Enterprise, is accused of 54 counts of corruptly giving gratification and one count of abetment by conspiring with 19-ANC's project director Yip Fong Yin to corruptly give Wong the $13,500 car purchase discount in December 2014.

Chia's companies also each face one charge of conspiring to corruptly give Wong gratification to advance their business interests with the town council. According to the Building and Construction Authority directory, both firms are licensed builders, and are registered to carry out repair and redecoration works.

Wong, who worked for CPG Facilities Management, the managing agent of the town council, was removed from duty after the town council received a complaint about him in September 2016 over "the way he handles contracts and dealings in the town council". 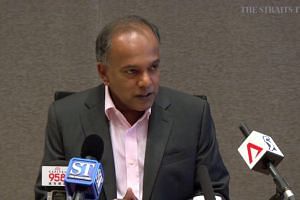 No one will be spared, nothing will be swept under the carpet: K. Shanmugam on probe of Ang Mo Kio Town Council ex-GM

He was later investigated by the Corrupt Practices Investigation Bureau (CPIB).

Wong and Chia intend to claim trial and are out on $100,000 bail each. Their passports have been impounded. Their case will be heard on April 11.

If convicted, they each could be fined up to $100,000 and jailed for up to seven years, or both, on each charge.

The companies could also be each fined up to $100,000 under the Prevention of Corruption Act.

In a statement, the CPIB said that Singapore adopts a zero-tolerance approach towards corruption. The bureau "takes a serious view of any corrupt practices and will not hesitate to take action against any party involved in such acts".