SINGAPORE - To jump the queue so that they can promptly collect or return their containers, truck drivers had to pay Chen Ziliang bribes of between 10 cents and $1.

On Thursday (Jan 10), the container yard forklift operator was jailed for two months and ordered to pay a penalty of $4,870.50, after pleading guilty to a corruption charge.

Chen ran the scheme from Feb 1, 2016, to March 12 last year, earning up to $10 in bribes daily. Those who did not bribe the Chinese national had to endure a longer waiting time, Deputy Public Prosecutor Ang Siok Chen told the court.

In total, Chen obtained nearly $5,000 from the truck drivers.

As a forklift truck operator for Cogent Container Depot, which provides container storage services, Chen received a monthly salary of $2,600.

He worked six days a week from Monday to Saturday.

Chen started his scheme when he was deployed to Cogent's container yard in Buroh Crescent near Pioneer Road. He was then in charge of operating a forklift to load and unload containers from the trucks. 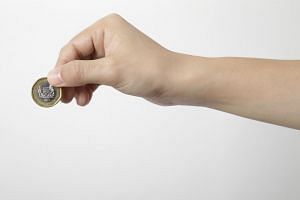 DPP Ang said that when carrying out their duties, forklift operators are not allowed to receive monies from the truck drivers.

She added: "When the accused was employed by Cogent, he knew there was a practice of obtaining monies from truck drivers at the container yard in return for allowing them to jump the queue for the collection or return of containers.

"The truck drivers would place coins, ranging from 10 cents to $1, at the mudguard of the forklift that the accused was operating on. Then he would collect these coins during his break and keep them in his pocket."

On Oct 20, 2017, a truck driver complained to Chen about the long waiting time to get served. The forklift operator replied that the norm was to pass him $1 or risk having to wait longer in the queue.

Court documents did not state if the driver alerted the authorities but the Corrupt Practices Investigation Bureau (CPIB) conducted a raid at the yard in March last year.

Officers arrested Chen after they caught him obtaining $2 in bribes.

In a statement on Thursday, the CPIB said: "Singapore adopts a strict zero-tolerance approach towards corruption. It is a serious offence to obtain bribes, or attempt to obtain bribes from another individual or entity."

Offenders convicted of corruption can be jailed for up to five years and fined up to $100,000.