SINGAPORE - The first person to plead guilty to offences under the new Organised Crime Act was sentenced on Wednesday (June 27) to two years' jail and a fine of $50,000.

Singaporean Or Poh Soon, 55, will have to spend an additional two months and 10 weeks behind bars if he is unable to pay the fine.

He had collected bets and sourced for punters for an illegal remote gambling syndicate which ran more than five 4-D and Toto websites. The court heard that from June 1, 2016, to Nov 27 the same year, the estimated turnover for one of the sites was about $26.64 million.

In arguing for the newspaper vendor to receive at least two years' jail and a fine of $40,000, Deputy Public Prosecutor Teo Lu Jia urged District Judge Edgar Foo to consider that as an agent, Or played an integral role in one of the largest organised crime syndicates that has been uncovered in Singapore.

"The court should send a strong deterrent message so that like-minded offenders would not find the risk of being caught and punished to be worth taking, in order to enjoy the financial benefits from such illicit gambling and organised crime activities," said DPP Teo.

Or, who was unrepresented, pleaded for leniency. He told the court that he has health issues including diabetes and heart problems.

He pleaded guilty on June 8 to one count each of illegally managing remote gambling activities, assisting in public lotteries and being a member of a locally linked organised criminal group. 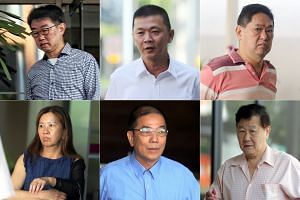 The syndicate had three main clusters and Or worked for the leader of one of them, Lean Kay Cheong, 62.

Lean's cluster had about 95 agents, said DPP Teo. She added that Lean had carried out public lotteries by accepting bets for 4-D and Toto, based on the same draw dates and winning numbers as the Singapore Pools' games.

Lean invited Or to work for him in 2012 as a 4-D and Toto collector for a commission of 8 per cent of the total bets collected. If the punters struck lottery, Or would also receive 5 per cent of the winning amount.

The DPP told Judge Foo that monies, including Or's cut from winnings, went through Lean's runner, Seah Ee Lam, 67. The cases involving the other alleged members of the syndicate are still pending.

The Organised Crime Act was passed in Parliament in 2015 and took effect in June 2016. Under the Act, enforcement agencies have more powers to disrupt the activities of organised crime groups and stop them from getting a foothold in Singapore.