SINGAPORE - A Chinese woman and a Singaporean man have been sentenced to jail for their involvement in a sham marriage, the Immigration and Checkpoints Authority (ICA) said in a statement on Monday (July 29).

Chinese national Zheng Guiling, 40, and Lim Peng Boon, a 64-year-old Singaporean man, were convicted of offences under the Immigration Act.

ICA said that in September 2014, Zheng, who had been on a 30-day visit pass, was introduced to Lim through a friend.

Zheng then told Lim that she wanted to stay and work in Singapore, to which Lim suggested that he could help find a local husband who could enter into a marriage of convenience with her, and hence prolong her stay in the country.

Lim told Zheng to pay $8,000 for the sham marriage arrangements, of which $6,000 would be given to her prospective husband.

Later that same month, Lim introduced Zheng to Loh Chee Wai, a 54-year-old Singaporean man, who agreed to enter into a sham marriage.

Loh received $3,000 from Lim after the solemnisation, and was told by Lim that the remaining $3,000 would be paid by Zheng in instalments. 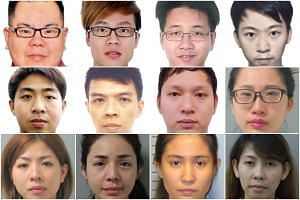 Loh and Zheng were arrested by ICA officers on May 30, 2018, for entering into a marriage of convenience, said ICA.

Lim was arrested on Jan 14 this year.

ICA said that it takes a serious view of individuals trying to circumvent its system by engaging in, arranging or assisting to arrange marriages of convenience to obtain immigration facilities in Singapore.

ICA said it would continue to take firm enforcement action against errant couples or middlemen, and spare no effort in investigating such cases.

Members of the public can report any suspected such cases to ICA at 1800-3916150. Any information provided would be treated in strictest confidence, it said.