This was why Madam Ng Lai Peng, together with her son Karl Liew and her daughter-in-law Heather Lim Mei Ern, decided to open three sealed boxes left behind by the maid after she was asked to leave on Oct 28, 2016.

Parti Liyani, who had worked for the family for eight years, faces four theft charges involving more than $50,000 worth of valuables, including a $25,000 Gerald Genta watch, two iPhones and a Gucci wallet. The items were allegedly uncovered from the three boxes.

In court, Madam Ng testified that she did not check the contents of the boxes while Parti was packing. It is not known why the family had asked Parti to leave.

A day after Parti left the residence in Chancery Lane, Madam Ng, her son and his wife decided to check the contents of the boxes, which were left behind at her house because they were "too big" for Parti to take with her.

They were told by Parti to send the boxes to her in Indonesia, added Madam Ng.

They wanted to check if their belongings were inside as their things kept disappearing, said Madam Ng, She added that each time she asked Parti about the missing items, the maid would say that she did not know anything. 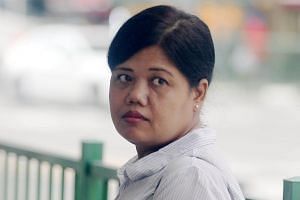 "We then found many things belonging to my son and the rest of us," said Madam Ng, who spoke in Cantonese and had her comments translated into English. These included pots and pans, forks and knives, clothing, DVD players and bags, she added.

She said her husband, Mr Liew, 71, a former chief executive of property giant CapitaLand Group, then lodged a police report.

During the hearing, Madam Ng also testified that after she informed Parti to pack her belongings, the Indonesian was "very angry because she wasn't given any prior notice".

She said Parti then went into her room and threw out things. That was when Madam Ng saw brand-new thermal wear that she thought belonged to her husband.

When she asked Parti about it, she said she bought it from a second-hand shop, Madam Ng said, adding: "I left it as it is, and she placed the item in one of the three boxes."

She also testified that about two years before the incident, she noticed a small sealed box in Parti's room. About a year later, the box was replaced by a bigger one.

She said she had asked Parti about the contents of the box in her room, but Parti said it contained items given to her as gifts.

Madam Ng said she had never checked the contents of the boxes in Parti's room.

After Parti was asked to pack her belongings in October 2016, the contents were emptied into the three boxes, said Madam Ng.