Many are lost genuine documents that have been tampered with

He peddles all sorts of forged papers on the black market, but the bright red Singapore passport - one of the most powerful travel document in the world - is among his hot sellers.

The seller on the Dark Web claims the fake documents are as good as state-issued ones, adding that the authorities will not be able to tell the difference.

In fact, the passport dealer, who also sells forged identity cards and driver licences, is so confident of his fake travel papers that he promises a refund if his customers run into problems.

The forged papers "are 100 per cent registered into the database system, so you will never have a problem using them" or passing through security checks, he told The Sunday Times via e-mail.

In the cyber underworld, peddlers are offering forged Singapore passports for sale.

Although the sellers also offer other passports, the Singapore one is a premium item because it allows the holder visa-free or visa-on-arrival access to 189 destinations.

On the online black market, the forged Singapore passport is offered at $3,800, with photographs and biodata substituted from the originals. For an extra $100, the passport can be ready within days and shipped anywhere in the world.

A fake Singapore identity card costs about $1,000. Other documents such as driving licences, work permits and university degrees are also available, and items are bought using bitcoin, a digital currency favoured for its secrecy.

The United States passport, which costs about $4,300 on the Dark Web and gives visa-free access to 184 destinations, is another hot item.

But one seller, who bragged about his links to immigration authorities and diplomats, cautioned: "There are people who (pass through checks) with my passports and other documents, but do your own research and do it at your own risk."

Unlike counterfeits which involve recreating a document, forged passports and identity cards are often genuine items that have been tampered with. And many are the result of documents that have gone missing, experts say.

In Singapore, it was previously revealed in Parliament that in the five years to 2014, about 7,000 passports belonging to the Republic were reported lost or stolen every year.

In that same period, about 1,700 travellers were caught with forged or tampered passports at Singapore checkpoints.

The problem of forged travel documents persists. Last year, Pakistani national Mohammed Iqbal, 52, was nabbed in Bangkok with three fake Singapore passports and a fake Indian one. He also had plates and laminates used to forge entry visas to France, Italy and Spain.

The problem is significant enough for Interpol to set up a database with more than 84 million records of lost, stolen and revoked travel documents - including passports, visas and identity cards.

Private investigator James Loh, who has come across a few passport cheating cases in his 17 years of practice, believes Singapore passport holders are sometimes "subjected to less strict scrutiny by some countries".

This suggests that even a stamp that signals a traveller has been through Singapore is coveted. Last month, police in New Delhi busted a syndicate that produced fake immigration stamps of 28 countries, including Singapore's. 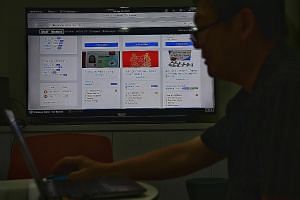 Medical records, bank account details and passwords can be bought for $1k on Dark Web

When 'dark' is not all evil

These stamps give immigration authorities the impression that a passport holder is a frequent traveller, making his visa application a smoother process.

Fake documents can also be used to sneak in terrorists, said Mr Tan Kah Leong, a director at technology-based risk consultancy TRS Forensics. Last year, Malaysian police arrested four Malaysians and seven Filipinos for being part of a scheme to provide safe passage for terrorists to enter the Philippines via Sabah by using fake travel documents.

HARDER TO TAMPER WITH

Biometric passports were introduced in Singapore in 2006, in part to combat the scourge of forged documents. Biometric passports contain a small chip that identifies the holder through unique physical characteristics such as fingerprints.

In 2017, the Immigration and Checkpoints Authority introduced a new design for the biometric passport, which comes with more features to make it harder to forge.

There are two new security features - the image of the passport holder inside a window which can be viewed as a positive or negative portrait when tilted and viewed in transmitted light; and a surface transformation design in the shape of the national flower, which displays reflective and animation effects at different angles.

A person who possesses a false document with an intent to use it as genuine may be jailed for up to 10 years and fined.

But lawyers said it may be difficult for the authorities to identify those selling fake documents on the Dark Web. Ms Gloria James, head lawyer at Gloria James-Civetta & Co, added: "It is also especially challenging if perpetrators are stationed overseas, as there are hurdles to prosecute them if they are."