SINGAPORE - National University of Singapore (NUS) law professor Tan Cheng Han will be leaving his role later this year to become dean of a law school in Hong Kong while his current post will be filled by Professor Hans Tjio.

The City University of Hong Kong confirmed 53-year-old Professor Tan's appointment to The Straits Times while the National University of Singapore's law faculty said that Professor Tjio will take over as the new director of the EW Barker Centre for Law and Business with effect from July.

"I'm excited to see Professor Tjio take the helm of the EW Barker Centre and build on the many successes of its inaugural director, Professor Tan Cheng Han, who has done an extraordinary job in leading the Centre since its founding," said Professor Simon Chesterman, dean of NUS Law.

"Hans Tjio has established himself as Singapore's leading securities regulation scholar, while also maintaining a strong record of engagement with industry and regulators."

The centre was established to promote research and educational opportunities for faculty, students, legal practitioners and business executives who share a common interest in law, business and economics.It is continually expanding its initiatives aided by a philanthropic gift totalling $21 million.

He presently serves on the Securities Industry Council and the SGX Listing Advisory Committee as deputy chairman. His work has also been published widely in international and local journals, and he has written or co-written books on company law, securities regulation and trust law.

Prof Tjio said he intends "to continue the inter-disciplinary approach to law and business set by Professor Tan Cheng Han".

He added: "We also hope to deepen our research into small and medium-sized enterprises which are vital to the real economy in terms of diversity and employment, and in the area of privacy and data protection. Last but not least, we are launching some exciting initiatives in the field of intellectual property, and are strengthening our collaborations with the Intellectual Property Office of Singapore." 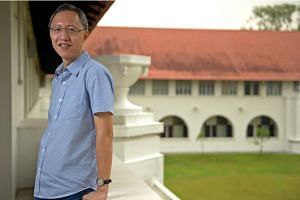 Prof Tan has played a significant role as chairman of the centre since its founding in 2014 and was instrumental in establishing it as one of the world's leading commercial law research centres.

Prof Tan has also had a tremendous impact on legal education through his teaching, research, and leadership as Dean of NUS Law from 2001 to 2011, said NUS Law.

Prof Tan served as consultant for TSMP Law Corp for a decade while still teaching at NUS and its joint managing partner Stefanie Yuen Thio said: "Cheng Han is a top legal brain, who is also blessed with sound commercial nous and the ability to communicate complex concepts clearly.

"These strengths made him a strong litigator and an outstanding academic, his twin professional passions. As dean of NUS Law Faculty, Cheng Han was instrumental in putting the law school on the international academic map, where we are currently ranked 15th in the world.

"Cheng Han's deanship at Hong Kong's City University's law faculty is a testament to his international reputation. I know this is only one more stepping stone in his stellar career. He will fly the Singapore flag high."

City University of Hong Kong said on Friday (Jan 25) that Prof Tan has been appointed as chair professor of commercial law in the School of Law.

He will assume his duties on July 2 and concurrently serve as Dean of the School from Sept 1.

"With Professor Tan's outstanding academic record and distinguished administrative experience, I am confident that he will lead the School to excel in research and professional education and to achieve new heights in the future," said the university's president, Professor Way Kuo.