Hours after the collapse of a Pan-Island Expressway (PIE) viaduct in July 2017, professional engineer Robert Arianto Tjandra, who had been overseeing the design of the project, said in WhatsApp messages to a colleague that the incident had been the result of a "design mistake".

The text messages were revealed in court yesterday during the cross-examination of prosecution witness Liu Xiayu, who was the subordinate of Arianto Tjandra at subcontractor CPG Consultants at the time.

Mr Liu had joined CPG in 2010, but resigned in February last year.

Arianto Tjandra, 46, was the qualified person from CPG who had approved the design and supervised the construction works for the project.

He is facing five charges under the Building Control Act and the Workplace Safety and Health Act.

The viaduct collapsed in the early hours of July 14, 2017, resulting in the death of 31-year-old Chinese worker Chen Yinchuan. Ten other workers were hurt, two seriously.

Yesterday, the court heard that about five hours after the incident, Mr Liu had messaged Arianto Tjandra, saying that he felt "so sorry about the accident". "Please let me know if I can help (with) something," he added in the text message.

In response, Arianto Tjandra asked Mr Liu to check calculations for piers 40 and 41 - vertical columns on which the viaduct would have rested.

After making the calculations, Mr Liu told Arianto Tjandra that the support structures had not been designed to sufficiently support the weight of the viaduct.

In response, Arianto Tjandra said to Mr Liu: "Then no deck slab can be cast?"

Mr Liu replied: "Yes. Not allowed deck slab." Deck slab refers to the slab of concrete that would have acted as the carriageway for vehicles on the viaduct.

"Die. My prop also failed," Arianto Tjandra said, referring to the temporary structures to support the weight of the viaduct that was under construction.

Subsequent WhatsApp messages between the men also revealed that after the collapse, the Land Transport Authority (LTA) had questioned CPG's design for parts of the viaduct, including piers 40 and 41. 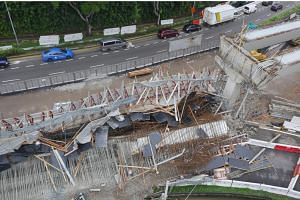 In one message, Arianto Tjandra told Mr Liu: "LTA boss already questioned our design for flyover 7 and 8. The design not consistent. Some piers heavily reinforced, some are not."

Mr Liu responded: "We try to explain. That's why we use propping. Anyhow, I may not know the full story. But let me know if you need help at any time. I am also responsible for it."

When defence lawyer Tay Peng Cheng from WongPartnership, acting for Or Kim Peow Contractors (OKP), asked Mr Liu if he had meant in the message that the PIE viaduct collapse was due to design inadequacies, Mr Liu said: "Correct."

In July, OKP was fined $10,000 for carrying out unauthorised strengthening works on the permanent corbels - support structures - of the PIE viaduct.

Its group managing director Or Toh Wat was also given a discharge not amounting to an acquittal for all three of his charges under the Building Control Act and the Workplace Safety and Health Act.

However, OKP still faces one remaining charge for causing the death of Mr Chen Yinchuan and the injuries of 10 others under the Workplace Safety and Health Act - which it is contesting in this trial.

Besides Arianto Tjandra, two other individuals allegedly linked to the incident - both OKP employees - are involved in the trial: project engineer Wong Kiew Hai, 31, and project director Allen Yee, 49.