SINGAPORE - Two SMRT trainees died because of a failure to impose safety protocols that would have prevented trains from entering the work site where a track inspection was being carried out.

But former SMRT engineer Lim Say Heng's failure to effect a "last line of defence" known as the 0/0 Automatic Train Protection speed code was the most direct cause of death, said District Judge Chay Yuen Fatt.

For his role in the March 2016 rail accident, Lim, 48, was sentenced to four weeks' jail on Monday (Mar 12) after he pleaded guilty to causing death by negligence.

The accident, the train operator's worst in history, resulted in the deaths of Mr Nasrulhudin Najumudin, 26, and Mr Muhammad Asyraf Ahmad Buhari, 24.

During sentencing, Judge Chay agreed with the prosecution that a jail term should be imposed.

"There is no denying that he (Lim) did not impose or give the instruction for the protocol," said the judge,.

The prosecution had asked for a sentence of at least four weeks jail, and said that a fine, even a high one, would be insufficient given that it was "fully" within Lim's "powers to ensure a safe inspection". 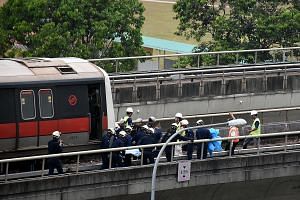 Pasir Ris MRT track accident one year on: What has happened since the accident

In his submissions, Deputy Public Prosecutor (DPP) Anandan Bala said the consequences of Lim's failure to ensure that the particular safety code was imposed, set in motion a chain of events that resulted in the fatal accident.

When imposed on a track circuit, the code would have ensured that a train comes to a stop before approaching the area.

The court heard that on Mar 22, 2016, a fault was detected along the track between Pasir Ris Station and Tampines Station on the East-West MRT Line at around 6.30am. The team of 15, led by Lim, was deployed at around 11am.

Instead of boarding a designated train that would take them to the work site, they walked on a walkway parallel to the track.

All this happened while the safety protocol had not yet been implemented.

This was among failures by different parties to comply with an approved set of safety operating procedures known as "Unit 3C OP"that governs track access during traffic hours.

Lim, who was at the front of the line that day, heard shouts and managed to avoid the oncoming train. Unfortunately the two trainees behind him were unable to react in time and were hit by the train.

Lim was sacked six months after the incident and now works as a technician.

During mitigation, Lim's lawyer Lee May Ling said he was not solely responsible for the implementation of safety protocols that resulted in the fatalities.

"Within SMRT, there was an environment where the Documented Safety Protocols were not, and could not be, adhered to," she said.. The defence sought a $10,000 fine. In October last year, former director of control operations Teo Wee Kiat, 41, was fined $55,000 for failing to take necessary measures to ensure the safety of SMRT employees.

These include making sure that approved operating procedures were complied with when accessing train tracks during traffic hours. Teo had also failed to ensure that the procedures passed safety audits and were documented and disseminated.

The rail operator was given a record fine of $400,000 in February last year over the same breach.

The families of the two trainees declined comment when contacted by The Straits Times.