When the mother of Sheng Siong supermarket boss Lim Hock Chee was told he had a bad fall in the office, she followed the stranger who broke the news to his car, expecting to be driven to see him.

Instead 79-year-old Madam Ng Lye Poh was taken a short distance before the man stopped the car, blindfolded her and lowered her seat to hide her from view.

"I told him I'm old and I have no money," Madam Ng told the High Court yesterday, as she testified about her 12-hour ordeal at the hands of 44-year-old sales executive Lee Sze Yong. "I asked him: Why kidnap me?"

Now 81, Madam Ng arrived in court in a wheelchair with Mr Lim and an Indonesian maid and was calm during her half hour in the witness box.

Lee is accused of hatching the plan to kidnap her on Jan 8, 2014, and faces the death sentence or life imprisonment with caning if convicted under the Kidnapping Act.

Yesterday, the court heard that Madam Ng's breakfast of tea and bee hoon, which she had at a coffee shop near her home before she was tricked into the car, was the only food she ate that day.

Although her kidnapper offered her a can of soft drink, Madam Ng said she refused it as she was diabetic. She also declined an offer of biscuits.

As she was driven around blindfolded, she was allowed to alight and relieve herself near the car a few times.

She also knew that she was being transferred to another car and was made to sit in the backseat. Later, another man came into the picture.

At one point, while being taken "round and round", she wanted to peep through her blindfold but someone lightly hit her hands.

She told the court in Hokkien that she could tell the person who hit her hands was "fat" as he was sitting beside her in the backseat. 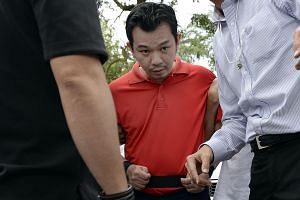 Accused: I was just trying my luck

The thinner man, the one she first met, told her that if she touched the blindfold, she would be tied up.

When questioned by Justice Chan Seng Onn, Madam Ng said that she was not able to recognise either man. Madam Ng denied that her kidnapper assured her that he would take her home that same night, contradicting Lee's testimony.

Defence counsel Selva K. Naidu told her that the soft drink can was analysed and her DNA was found at the opening. But Madam Ng insisted that she did not drink anything throughout the episode.

After she finished testifying, Madam Ng was helped back into her wheelchair by her maid and three Criminal Investigation Department officers. "I have to see a doctor," she told the court.

The case has been adjourned for four weeks for closing submissions.