SINGAPORE - Eight men were charged with outrage of modesty on Tuesday (Feb 27) in separate court cases.

The five Singaporeans and three foreigners, aged from 23 to 67, face between one and three charges each.

The offences were committed between November 2016 and last December

Tham Kin Leong, 34, claimed trial to molesting a 15-year-old girl on an MRT train travelling between Bishan and Marymount on Nov 8 and 9, 2016. A pre-trial conference will be held on March 13.

Tan Boon Hwee, 29, is alleged to have molested a 19-year-old by touching and stroking her feet at Singapore Botanic Gardens on March 11 last year.

He faces a second charge of using criminal force by pulling the teenager's hair and will return to court on April 2.

He is accused of two counts of using criminal force on Special Constable/Sergeant Zuo Zhuang by kicking him in the leg three times and headbutting him. He was also charged with causing hurt to SC/Sgt Zuo by kicking his left leg twice and using abusive words towards him. 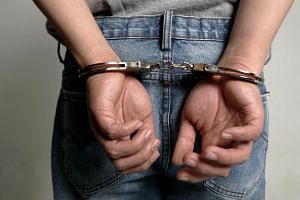 Subjebto Pono, 67, who faces two charges, is said to have cupped a 38-year-old woman's face and kissed her on the forehead at a storeroom at Concorde Shopping Centre, Orchard Road, on Sept 24 last year.

He is also accused of hugging a 40-year-old woman and putting his face close to hers at the mall on Oct 2 last year. He intends to plead guilty and his case will be mentioned on March 27.

Jee Chai Chai, 23, was charged with squeezing the bottom of a 55-year-old woman while cycling past her along in Lorong 1 Toa Payoh on Nov 8.

The second charge accuses him of grabbing the buttock of a 46-year-old woman while cycling behind her on a jogging path in front of Block 219 Lorong 8 Toa Payoh on Nov 11.

Jee, who will be back in court on March 27, is likely to face an additional property-related charge.

Japanese businessman Yujiro Tomita, 33, allegedly smacked a 33-year-old's bottom at a public entertainment outlet on Emerald Hill last Nov 27. He will appear in court on March 21.

Indian national Vanangamudi Balakrishnan, 28, is accused of squeezing the bottom of a 23-year-old outside a lift at an HDB block in Sin Ming Avenue on Dec 1. The case will be mentioned on March 6.

Private-hire car driver Tiu Hong Hwee, 37, allegedly kissed a 19-year-old in the front passenger seat of his vehicle in Orchard Road on Dec 10. He is said to have molested her two more times at Concorde Hotel's basement carpark.

A pre-trial conference has been scheduled for March 13.

The maximum penalty for outrage of modesty is two years' jail, fine and caning.