Civil activist Jolovan Wham and opposition politician John Tan yesterday became the first to be found guilty under new contempt of court laws of scandalising the judiciary in posts they had made separately on Facebook.

The High Court found that the pair's Facebook posts had impugned the integrity and impartiality of the Singapore courts, and posed a risk that public confidence in the administration of justice would be undermined.

Wham had made a Facebook post on April 27 stating that Singapore's courts are not as independent as Malaysia's on cases with political implications.

The Attorney-General's Chambers (AGC) then initiated contempt of court action against him.

On May 6, Tan, a Singapore Democratic Party (SDP) politician, stated on Facebook that the AGC's actions confirmed the truth of Wham's comment.

The cases, the first to be brought under the Administration of Justice (Protection) Act, were argued before Justice Woo Bih Li in July. 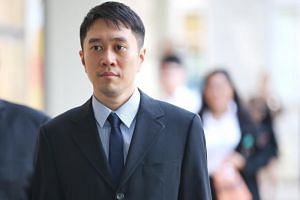 Activist Jolovan Wham: Pretty clear Government would not be happy with Mahathir meeting

Back then, Senior State Counsel Francis Ng, representing the AGC, argued that Wham's remarks implied to an average person that if the constitutional challenge in Malaysia were to happen in Singapore, it would fail due to a lack of judicial independence here.

Mr Thuraisingam made the case that Tan's statement was not directed at the courts but at the AGC.

The defence also argued that the provision in the Act that governs contempt by scandalising the courts violates the constitutional right to freedom of speech, as it effectively criminalises speech that has only a small likelihood of undermining confidence in the administration of justice.

However, Justice Woo ruled yesterday that the provision was constitutional. He found that - from the view of the average reasonable person - Wham's post posed a risk of undermining public confidence in the administration of justice.

"Further, I find that Wham's post had no rational basis and Wham made a bare statement impugning the integrity and impartiality of Singapore's judges without providing any basis for the statement.

"I find that Wham's post was not made in good faith, and did not constitute fair criticism of a court," said Justice Woo. The judge said that since Wham's post impugned the integrity and impartiality of the Singapore courts, Tan's post - which was "not premised on objective facts or on a rational basis"- did likewise.

The case has been adjourned for sentencing.

The AGC has to file written submissions by Tuesday next week, while Wham and Tan have to file by Oct 30. A hearing date for oral replies will be fixed after Nov 7.

A person found guilty of contempt could be fined up to $100,000 or jailed for up to three years, or both.

In a statement yesterday, the AGC said it will take firm action against contempt of court in appropriate instances.