SINGAPORE - A 22-year-old man was arrested on Sunday evening over the murder of two women, aged 56 and 90, who are related to him.

He is expected to be charged in court on Monday (Oct 28).

The police said they were alerted to a case of two unnatural deaths at Block 7A in Commonwealth Avenue at 7.24pm.

Both women were found lying motionless and were pronounced dead by paramedics at the scene.

The police have classified the case as murder. Investigations have revealed that both the deceased and the suspect were related.

The Singapore Civil Defence Force said two other persons were taken to the National University Hospital in ambulances.

Neighbours said they heard a commotion on the ground floor of the Housing Board block at about 7pm, with a group of people shouting and screaming.

Passers-by told The Straits Times that they called the police after the suspect started attacking other members of the public on the ground floor of the block.

The suspect, who was in a singlet and shorts and was barefoot, had been walking in front of a group of people who were headed for prayers nearby, when he suddenly turned around and assumed a fighting position, said eyewitness K.C. Lam, 49.

Police cordon at the lift lobby of Blk 7a Commonwealth Ave 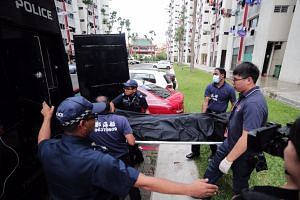 “He looked very aggressive from his eye contact, and when I tried to calm him down, he turned violent,” said Mr Lam, adding that the suspect’s right hand was stained with blood.

Another passer-by, Mr Han Dong Guang, 63, said the suspect told Mr Lam: “Call the Government to talk to me.”

Mr Lam said that once the suspect threw the first punch at him, others joined in to try to calm him down and subdue him, but he attacked them instead.

“He was trying to challenge everybody, he had a very aggressive pose and he was saying something but I couldn’t understand him,” he added.

It took four people to subdue the suspect and pin him down to the ground before the police arrived, Mr Lam said. “I can’t imagine what would have happened if he had ended up at the bus stop.”

Police officers were seen gathering evidence at two adjacent units on the seventh floor of the block.