SINGAPORE - Those hoping to have an online shopping spree on Black Friday and Singles' Day should be careful not to get scammed, the authorities have warned.

In a statement on Saturday morning (Nov 10), the police said that scammers look to cheat victims eager to take advantage of big discounts.

Black Friday, originally a US shopping promotion, is on Nov 23.

In a separate statement, the Singapore Computer Emergency Response Team (SingCERT) also warned against a variety of scams with the coming holiday season and series of promotions, including Cyber Monday and Thanksgiving.

These include phishing websites and e-mails, and scams involving impersonation, greeting cards, travel, and text messages.

"Such scams are popularly employed by hackers who lure shoppers with too-good-to-be-true discounts to entice them to click on links and complete their transactions on fraudulent websites," it said. 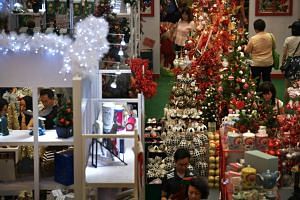 Stay vigilant against scams and outrage of modesty in coming festive period: Police

Gear up for 11.11 with the Singles' Day sale getting bigger in Singapore

In its statement, the police added that they received more than 1,800 reports of e-commerce scams involving $1.5 million cheated between January and September.

"Victims typically fell prey to bogus offers that were advertised on online platforms like Carousell. Items were not received after payments were made," it said.

The police advised members of the public to refrain from being impulsive, and to be wary of online advertisements with overly cheap prices.

It also warned against making advance payments and said that scammers may use local bank accounts or identification document to make themselves seem legitimate.

SingCERT also advised against using public Wi-Fi networks for financial transactions, and to avoid clicking on links in promotional e-mails or text messages.

Instead, one should visit the official website by typing its address into a web browser, and check if the website has a "lock" icon in the address bar.

This indicates that the site is legitimate and trustworthy as it has a Secure Sockets Layer, or SSL certificate which enables encryption.