A company director on trial for allegedly giving bribes totalling more than $107,000 to a former town council general manager changed his tune a day after giving his statement to an anti-graft investigator.

Chia Sin Lan, 63, told a Corrupt Practices Investigation Bureau (CPIB) officer on Oct 5, 2016 that he had thought about his family and decided to "tell the truth", the court heard yesterday.

Chia told CPIB principal special investigator Keith Peh on Oct 5 that he had actually given $20,000 to the mistress of Wong, 58.

Both Chia and Wong are on trial for corruption.

Chia, who is facing 54 counts of bribing Wong to advance the interests of his companies, also said he had paid for all the entertainment expenses incurred when he went on two trips to China with Wong in 2016.

In his initial statement, he had said they took turns to foot the bill.

These and other details emerged when Mr Peh took the stand, on the second day of trial into the gratifications which Chia had allegedly provided to Wong for almost two years, up to 2016.

Wong faces 55 charges for receiving the bribes, with the "lion's share" of the gratifications - or close to $53,000 - going to entertainment expenses incurred by the two accused at various KTV lounges and massage parlours, the prosecution said.

During the period when Wong received the gratifications, Chia's companies - 19-ANC Enterprise and 19-NS2 Enterprise - were given tenders and contracts worth millions of dollars by Ang Mo Kio Town Council, the prosecution added. 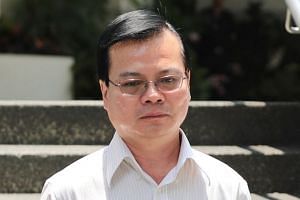 These were for projects such as repair and redecoration of Housing Board blocks.

In his statement recorded by Mr Peh, Chia also said he was approached by Wong to find a job for his daughter-in-law Le Thi Hien. He did so, with a subcontractor of 19-ANC and 19-NS2. Ms Le's salary, however, was paid by Chia and his business associate Tay Eng Chuan, a director of 19-NS2.

Earlier yesterday, Wong's lawyer Melanie Ho, of WongPartnership, told the State Court that Wong had forked out more than $10,000 from his own pocket to pay the bills when he went drinking with Chia. Ms Ho disclosed this while cross-examining CPIB's chief special investigator Tan Jun Kiat.

She said Wong had told the CPIB he had attempted to pay for the entertainment sessions with Chia and his associates, and did so on a few occasions.

She then asked Mr Tan why he did not verify this further when taking Wong's statement in 2016.

Mr Tan said he did not do it as Wong was unable to show proof that he had paid for the expenses, adding that he was unaware if this was later verified by other CPIB colleagues. The trial continues today.