He duped CPF Board into disbursing $434,241 from 14 patients' Medisave accounts to clinic where he worked

A dentist who came up with a bogus claims scam involving his patients' Medisave accounts was sentenced to 21/2 years in jail yesterday.

Steven Ang Kiam Hau, 44, admitted in a district court he had duped the Central Provident Fund (CPF) Board into disbursing $434,241 from 14 patients' Medisave accounts to The Smile Division Surgeons @ Orchard, the clinic where he worked.

As part of the ruse, Ang would offer less well-off patients lower rates for day surgery than those of other clinics. He would certify the procedures were done on patients on multiple dates, even though they were done in one or, at most, two days.

This was to circumvent the daily withdrawal limits set by the Ministry of Health (MOH) and receive multiple claim amounts from the patients' Medisave accounts.

The clinic's managing director allegedly discovered and offered Ang's dodgy scheme to other patients. The offences took place between 2011 and 2013 before they were discovered.

On May 4, Ang pleaded guilty to 30 cheating charges involving five patients and $65,858. Another 253 charges relating to the remaining amount were taken into consideration during sentencing.

Yesterday, District Judge Kan Shuk Weng said Ang had committed a grave offence involving a public institution and had abused the trust placed in him. But the judge also noted Ang had made full restitution with interest and had appeared genuinely remorseful.

Deputy Public Prosecutor Teo Guan Siew said that for dental implants, Ang "would submit, on behalf of the patient, multiple Medisave claims based on fictitious surgery dates on which no surgery was, in fact, carried out, so as to circumvent the withdrawal limits".

The DPP also said Ang's share of the net fees was 56 per cent, and the rest went to the group.

The dental group's managing director Cecil Goh Chin Chye, 48, found out about the dodgy scheme in 2011 and saw it as a way to attract more patients, the court heard. 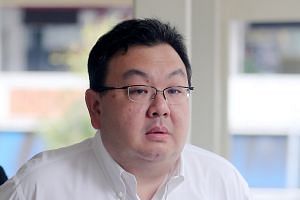 He and Ang agreed it should continue at the Lucky Plaza clinic. Goh also allegedly decided to implement it at other Smile clinics.

The offences came to light following an audit, and MOH made a police report on July 14, 2014.

DPP Teo said Ang had returned more than $535,000 to the CPF Board on Dec 21 last year, which included the initial amount plus 4 per cent interest per annum. This was disbursed to the patients' Medisave accounts. He, however, pointed out that no weight should be given to Ang's restitution, arguing it was a tactical move to get a lighter sentence and not indicative of his remorse.

Yesterday, Ang's lawyer, Senior Counsel Davinder Singh, asked the court to defer the sentence, saying his client needed time to get advice on the matter. Ang is out on $250,000 bail. If he does not appeal, he will start his sentence on Friday next week.

The Singapore Dental Council disciplinary committee has suspended him from practice for a year, starting from May 11, for submitting the false claims.

Besides Goh, the clinic's practice manager Yeo Meow Koon, 47, and dentist Daniel Liew Yaoxiang, 36, are also accused of conspiring with Ang to cheat patients. Their cases are pending.