The judiciary and the Attorney-General's Chambers (AGC) are ramping up efforts to deal with an increasing workload while tapping technology to increase efficiency and devise lower-cost solutions for the public.

At the opening of the legal year ceremony yesterday, Attorney-General Lucien Wong said there will be an increase in headcount for the next five fiscal years, comprising mostly legal officers, to manage the government-wide demand for legal services that has been on the rise in recent years.

For example, he said, the AGC has seen more requests for new and updated legislation.

The number of Bills has risen by 167 per cent and the pages of Bills produced has grown by 169 per cent since financial year 2013, he said.

There has also been an increase in the volume of domestic criminal and civil cases handled by the AGC, as well as disputes at an international level.

There are also more complex cases that require "much thought and delicate handling", he said, ranging from constitutional and administrative law challenges, to the sentencing of mentally ill offenders, to complex fraud and market manipulation cases.

In a similar vein, Chief Justice Sundaresh Menon said the caseload of the Court of Appeal - Singapore's highest court - is more than 50 per cent higher than in 2013. The cases being heard are also increasing in complexity, he added. 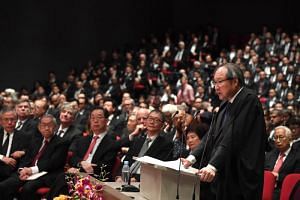 As a small state, law is key tool in managing ties with others: Attorney-General Lucien Wong

To cope with the growing case-load, High Court Justices Belinda Ang and Quentin Loh have sat regularly on the Court of Appeal. They will be joined by Justice Woo Bih Li this year, said CJ Menon.

The number of days on which the Court of Appeal sits to hear cases has also been increased.

"Beyond this, we will also examine possible structural adjustments to help address the growing appellate caseload," said CJ Menon.

The complex matters on their plate included the criminal case involving the misuse of City Harvest Church funds.

In their speeches, CJ Menon and Mr Wong also dwelt on ongoing efforts to innovate and harness technology and artificial intelligence.

CJ Menon said that an online dispute resolution platform for motor accident cases is projected to be launched in phases beginning from the end of this year.

Mr Wong highlighted the AGC's efforts to be at the forefront of legal technology. A digital workbench - which allows legal officers to monitor their work, provides a single search point across different databases of precedents and automatically generates statistics - is on track to be launched this year.

Close to 600 members of the local and international legal fraternities, including the chief justices of Indonesia, Malaysia and the Philippines, attended the ceremony.