SINGAPORE - The High Court on Friday (Sept 20) ruled that a married couple, who are now in prison for abusing their Myanmar maid, will start serving their jail term for abusing their Indonesian maid only after completing their current sentence.

This means former regional IT manager Tay Wee Kiat will serve a total jail term of six years and one month for abusing both maids.

His wife, former senior sales manager Chia Yun Ling, 43, will serve a total term of four years and one month.

Tay and Chia had been given two sets of sentences, arising out of two separate trials and appeals.

The commencement date for the first set of sentences had been put on hold pending the conclusion of the second set of proceedings.

On Friday, a panel of three judges agreed with prosecutors that the two sets of sentences should run one after the other.

"We do not see any valid reason for the sentences to commence on an earlier date as that would virtually enable the accused persons to evade punishment entirely for one set of offences," said Justice See Kee Oon.

The court, which also comprised Chief Justice Sundaresh Menon and Judge of Appeal Tay Yong Kwang, declined a request by the prosecution for examination and seizure of the couple's assets as a consequence of not paying compensation.

The court noted that the prosecution had elected to seek default jail terms, among other mechanisms prescribed by law.

"If the prosecution had wanted to seek orders for examination and garnishment, the necessary directions ought to have been sought at the last hearing before us."

Tay and Chia had abused their maids in mostly separate incidents over a period of almost two years.

The exception was an incident in which Tay kicked the two maids after making them get into a push-up position.

He also ordered the two maids to slap each other 10 times, and forced them to bow and get up in front of a Buddhist altar 100 times, even though one was a Muslim and the other a Christian.

Tay had forced Ms Fitriyah, an Indonesian who goes by one name, to stand on one leg on a stool while holding another stool above her head, with a bottle shoved into her mouth.

Chia had force-fed Ms Moe Moe Than a mixture of rice and sugar through a funnel. When the Myanmar maid threw up as a result, Chia scolded her and told her to eat her own vomit. 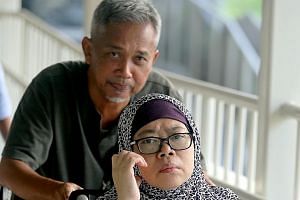 When family members abuse a maid together

The couple were first convicted and sentenced in 2017 for abusing Ms Fitriyah.

In March this year, the couple were convicted and sentenced for abusing Ms Moe Moe Than. They started serving their sentences for this set of charges on March 27.

In August, Tay's jail term for abusing Ms Moe Moe Than was increased from 24 months to 30 months after an appeal by the prosecution.

There was no change to Chia's jail term of 47 months.

On Friday, Deputy Public Prosecutor Tan Wen Hsien argued the two sets of sentences should run consecutively to each other.

Consecutive sentences would reflect the couple's total criminality, the DPP argued, noting that there were multiple charges for unrelated offences against two different victims.