A husband-and-wife pair allegedly lived off the prostitution earnings of a Bangladeshi woman originally hired to work as a dancer in a club the man managed.

A district court heard that she was later "coaxed" into sex work.

The two Indian nationals, Priyanka Bhattacharya Rajesh, 31, and her husband Malkar Savlaram Anant, 51, have claimed trial to prostitution-related charges under the Women's Charter.

They are also accused of three offences each under the Prevention of Human Trafficking Act.

Court documents stated that Priyanka and Malkar allegedly harboured three Bangladeshi women - including the sex worker - "by means of abuse of power for the purpose of exploitation... in Singapore".

The women and their workplaces cannot be named because of a gag order to protect their identities.

The Straits Times understands that this case could potentially lead to the first labour trafficking conviction here under the Act.

Following a trial, District Judge Shaiffudin Saruwan had been expected to give his verdict yesterday.

However, he asked for more submissions and is now expected to give his verdict on Nov 15. 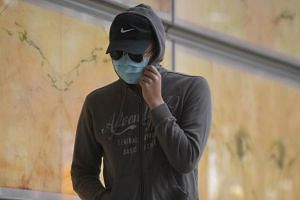 Recalcitrant offender back behind bars after assaulting sex worker, robbing another woman

In their earlier submissions, deputy public prosecutors James Chew and Rimplejit Kaur said Malkar was the sole managing operator of an entertainment club in the city area.

He was also responsible for the recruitment of performing artists at a second entertainment club near the other nightspot.

The prosecutors said that Priyanka also managed the day-to-day operations of both clubs.

The woman who later became a sex worker was hired as a dancer for one of the clubs. She arrived in Singapore on Dec 22, 2015.

The two other women, who came to Singapore in 2016, worked as dancers in the other club. The trio were promised a monthly salary of 60,000 Bangladeshi taka (S$965).

The prosecutors told the judge that Priyanka and Malkar "abused their power as employers by subjecting the victims to verbal abuse, onerous financial penalties should they decide to resign, close surveillance, and tight control over their movement and communications".

Court documents stated that Priyanka approached the first woman about a month after she arrived in Singapore and told her that she had to collect tips amounting to at least $10,000 each month, failing which she would not be paid her full salary.

The prosecutors added that Priyanka also told her she would have to "go out with customers".

The woman testified earlier that this meant she had to have sexual intercourse with them.

When she said she wanted to return to Bangladesh, Priyanka told her she had to pay about 400,000 Bangladeshi taka before she could return home, said the prosecutors.

The prosecutors also said that Priyanka "lured" the woman into providing sexual services by misleadingly promising her that she could keep half the payments received.

The woman eventually relented on four separate occasions, and her earnings went to the couple, the court heard.

During the trial, Priyanka testified that she had "no involvement at all in the work of the clubs".

Malkar also testified that his wife had "no involvement" in the clubs.

The couple, who are represented by lawyer Jayakumar Naidu, are now on bail of $20,000 each.

A version of this article appeared in the print edition of The Straits Times on October 24, 2019, with the headline 'Couple alleged to have lived off prostitution earnings'. Subscribe
Topics:
More
Whatsapp Linkedin FB Messenger Telegram Reddit WeChat Pinterest Print Purchase Article Copy permalink