Despite rise in complaints, no. of cases investigated slid to 132 last year; most involve private sector

The number of corruption cases scrutinised by the Corrupt Practices Investigation Bureau (CPIB) fell to a new low last year despite a rise in complaints. 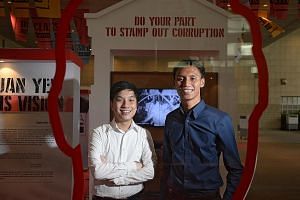 'He said he'd give me everything he had'

Of the cases pursued last year, 11 per cent involved public officers - a drop of 4 points against the previous year. The rest were private-sector cases.

The CPIB also said about 120 people were prosecuted last year. And nine in 10 of them were from the private sector, mainly from three sectors: construction, marine services and procurement services.

The bureau also pursues non-corruption offences uncovered in its investigation and those found criminally involved are taken to court.

The bureau released the corruption figures yesterday, which coincides with the opening of its roving exhibition at the National Library. The show, "Declassified: Corruption Matters", was opened by Prime Minister Lee Hsien Loong.

He reiterated Singapore's strict anti-corruption stand, saying no one is immune from being investigated. The CPIB can investigate anyone, including ministers, he added.

"Everyone knows that when the CPIB calls you up to lim kopi, it is not a casual invitation," he said, referring to the Hokkien phrase for "drink coffee".

To enforce the law, the CPIB is kept independent, he said.

Elaborating, he said Singapore's first prime minister Lee Kuan Yew and his team knew the country had to start from a clean slate of no corruption.

"They understood that one term of an incompetent, corrupt government, and the system will go corrupt, and the cancer would be embedded in the system."

It was symbolic, he added, that Mr Lee Kuan Yew and his People's Action Party colleagues wore white shirts and trousers at their first swearing-in ceremony, and made the all-white outfit the party's uniform.

"It symbolised their determination to keep the Government clean and incorruptible, and it has set the tone for Singapore ever since."

Singaporeans, too, expect a clean system, and do not condone giving or accepting gifts to get things done. "They readily report corrupt practices when they encounter them. Singaporeans trust the law applies to all and that the Government will enforce the laws without fear or favour," said PM Lee.

Still, Singapore cannot permanently and completely eradicate corruption, which is driven by human nature and greed, he noted.

But when people succumb to the temptation, "we must make sure they are caught and dealt severely with", he said.

PM Lee also honoured public- and private-sector individuals who have rejected bribes in their course of work. They were presented with commendation plaques.

The exhibition, which charts Singapore's anti-corruption journey, will be at the National Library in Victoria Street until May 22. From June to October, it will be on the move, to libraries in Tampines, Bishan, Jurong and Woodlands.