SINGAPORE - A drug abuser, who tried to get away from the police after stealing a Rolex watch, barged into a stranger's flat and threatened a woman with a knife.

Cleaning supervisor Mohamed Fazulla Mohamed Khan refused to surrender and wrongfully confined the 23-year-old woman in a bathroom of the Pasir Ris flat from around 3.30pm on March 21, 2016.

He finally released her about 1½ hours later and surrendered himself at around 7.20pm that day.

Fazulla, 36, who has earlier drug convictions, was sentenced on Wednesday (Oct 9) to five years' corrective training (CT) with three strokes of the cane.

CT is a penalty meted out to repeat offenders and they are not eligible for the usual one-third remission for good behaviour.

Fazulla had pleaded guilty earlier this year to nine charges for offences including theft, criminal intimidation and drug consumption.

While a sales assistant was attending to another customer, Fazulla slipped the watch into his pocket and walked away without paying for it.

The store owner later found the watch missing and alerted the police.

Following an investigation, police decided to ambush Fazulla at a Pasir Ris block five days later, where he was spotted at a staircase landing at around 3pm.

He fled when he spotted the police and barged into the woman's flat on the fourth storey, as the main gate was unlocked.

He took a knife with a 12.5cm-long blade from the kitchen and knocked on the bathroom door.

The woman opened it and was shocked to see Fazulla with the weapon.

Deputy Public Prosecutor Sheryl Yeo said: "The victim then tried to close the toilet door but the accused managed to barge into the toilet."

Fazulla stopped the woman, who was fearful for her life but stayed quiet, from leaving the toilet.

Police officers who had entered the flat asked Fazulla to release the woman. He refused and said that he would give himself up in two days' time. 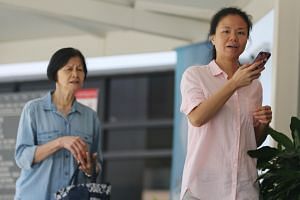 Jail for mother-and-daughter pair who went on shoplifting spree

He released the woman at around 5pm but still did not want to surrender, telling officers that he would stab himself.

The woman was not injured, the court heard.

About 30 minutes later, officers from the Crisis Negotiation Unit were deployed to the scene and the Singapore Civil Defence Force set up an airbag on the ground floor.

He finally surrendered and was taken to Bedok Police Division.

Police searched Fazulla's flat on March 28, 2016, and found the Rolex watch that he had stolen.

He was released on bail but instead of lying low, he went on to commit multiple counts of theft.

Between August 2016 and December last year, he went to three different shops islandwide to steal items including a $3,350 Chanel bag and wallet worth $1,280.

He also stole a cash card from a taxi driver in October last year.

Fazulla is represented by lawyers Patrick Fernandez and Cheryl Tan.

In their mitigation plea, they said their client suffers from antisocial personality disorder, "making him lack impulse control, commit offences without considering the consequences, as well as disregard others' well-being".

The lawyers added that Fazulla lacked the ability to exercise self-control because of his mental illness.

For each shoplifting charge, he could have been jailed for up to seven years and fined.