SINGAPORE - As Singapore hunkers down to curb the spread of the coronavirus, a group of friends met in Orchard Road to drink and make merry while circuit breaker measures were in place.

When police turned up, a member of the group showed his displeasure by cursing at the officers and damaging their car.

He also faces one charge of contravening a control order and another charge of conducting himself in a disorderly manner.

Court documents show that Navarro had met five people in Orchard Road at Spanish restaurant FOC Pim Pam for the social purpose of "drinking and chatting" betweeen 10pm and 11pm on April 19.

Such gatherings have been banned under Covid-19 rules.

Navarro is said to have behaved in a disorderly manner and had allegedly hurled vulgarities at a police officer.

He is also believed to have cost $309 in damage by intentionally denting the police car with his head at about 1.20am the next day.

In court on Wednesday (May 6), Navarro said he will be seeking legal counsel. 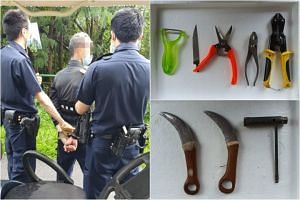 Coronavirus: Man allegedly spat at cop after he was caught not wearing mask outdoors

It was not mentioned if the other five people in the group - identified as Muhammad Khairul Ahmad Sa'ri, Chua Xin Ying, Chau Mun Howe, Karmillah Saleha Wardle and Vincente Rejas Javier - are facing any charges.

Singaporean Lee Ah Loo, 66, was also charged in court on Wednesday with harassment.

Lee is accused of uttering vulgarities at a National Environment Agency (NEA) enforcement officer on two separate occasions on May 2 and April 26 at Beo Crescent Market.

Lee told the court that he would not be pleading guilty, noting that the officer had scolded him first. He did not elaborate on how the dispute arose.

Both he and Navarro are due back in court on May 22.

If convicted of harassing a public servant who was performing public duties, Lee and Navarro could be liable to a maximum jail term of 12 months, a fine of up to $5,000, or both.