Firm carried out unauthorised strengthening works at the structure

Construction company Or Kim Peow Contractors (OKP) was fined $10,000 yesterday for carrying out unauthorised strengthening works on the permanent corbels - which are support structures - of the Pan-Island Expressway (PIE) viaduct that collapsed in July 2017.

The fine comes two days before the company is set to contest its remaining charge over causing the death of a Chinese worker and the injuries of 10 others under the Workplace Safety and Health Act.

Yesterday, Deputy Public Prosecutor Yang Ziliang said investigations by the Building and Construction Authority, following the fatal collapse of the viaduct on July 14, 2017, found that OKP had conducted unauthorised works at the structure near Upper Changi Road.

Some time around July 4, 2017, Robert Arianto Tjandra of subcontractor CPG Consultants - who had been appointed the qualified person to prepare the plans of the building works for the viaduct project - instructed project director Allen Yee Chee Keong from OKP to reinforce the completed crosshead at pier 36 of the viaduct.

The next day, one of Arianto Tjandra's design engineers sent Yee and project manager Andy Chang a drawing that detailed how the concrete on the corbel surface would be hacked, holes drilled and additional rebars installed in the completed crosshead at pier 36.

The drawing had been endorsed by Arianto Tjandra.

However, the proposed works deviated from plans that had been approved by the Commissioner of Building Control earlier.

"As this deviation involved a material change to the structural design, the qualified person was also required to submit the structural plans and design calculations to the Commissioner of Building Control for approval before construction," said DPP Yang. 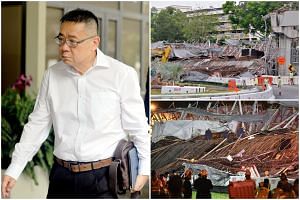 But on July 8, 2017, OKP moved ahead and its employees carried out the building works without any approval, said the DPP, who called for the court to fine OKP $10,000 for the offence. Under the Building Control Act, OKP could have been fined up to $200,000, jailed for up to two years or both.

The company is facing another charge over the collapse, involving an offence under the Workplace Safety and Health Act, where the company allegedly failed to take measures to ensure the safety and health of its employees while at work.

The collapse resulted in the death of 31-year-old Chinese worker Chen Yinchuan. Ten other workers were hurt - two seriously - during the incident.

OKP had been the main contractor for the construction of the structure near Upper Changi.

The local construction firm and its group managing director Or Toh Wat were allegedly aware of cracks in the corbels of piers 40 and 41 of the viaduct, but had failed to do proper risk assessments of the affected corbels and take measures to ensure the safety and health of employees.

The fifth individual - managing director of Calibre Consulting Singapore Leong Sow Hon, who had been appointed by the Land Transport Authority as an accredited checker for the viaduct project - was sentenced to six months' jail earlier this month.