Veteran track and field coach Loh Siang Piow, who has been charged with using criminal force on a teenage athlete under his charge in 2013, testified in court for the first time yesterday.

The 73-year-old, better known in the local sports fraternity as Loh Chan Pew, is accused of molesting the female athlete twice when she was 18. The alleged victim and her family cannot be named.

Loh is accused of using criminal force and rubbing the teenager's genitals on two occasions while massaging the back of her thighs.

The first incident is alleged to have occurred on a Sunday between Jan 27, 2013, and March 17, 2013, on a bench in the old Tampines Stadium. The second allegedly took place on March 15, 2013, on a massage bed inside an equipment room in the same stadium.

Responding to his own lawyer, Loh admitted that he gave a "rubdown" of the girl's hamstrings, but said he did so only because she requested it during a speed endurance training session.

He also denied he performed the massage after an individual training session, as alleged by the girl, claiming that it happened during a group training session. He also claimed that he did it in between sets to "loosen the muscle" of the athlete so that she could continue with her sprinting drills.

"All my private athletes were there," he testified.

When asked how many times he performed a rubdown massage on the accuser, Loh answered "only once or two times", and claimed that, on one of the occasions, he asked a male national athlete under his charge to help take over and perform it. 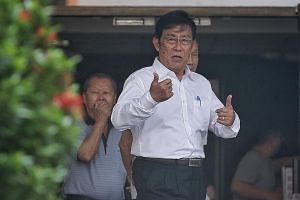 Denying that he had offered the rubdown massage, Loh also described his accuser as an attention-seeker.

Earlier, in the morning, Loh's lawyers filed a "no-case" submission, and made their arguments over 2-1/2 hours.

But District Judge Marvin Bay said the prosecution had established a prima facie case, and called Loh to the stand to offer his defence.

Loh is a former national sprinter who won a 4x100m relay silver at the 1973 South-east Asian Peninsular Games. He remains Singapore Athletics' vice-president (competitions organising), but is currently on a leave of absence.

Anyone convicted of using criminal force with the intention of outraging the modesty of a person can be jailed for up to two years, fined and caned. But as Loh is above 50 years old, he will not be caned if convicted.