A 58-year-old businessman who was originally given life imprisonment for the "bloody and brutal" murder of his wife's former lover was sentenced to hang yesterday after the apex court overturned the earlier decision and allowed an appeal by prosecutors for the death penalty.

A three-judge Court of Appeal said the actions of Chia Kee Chen "exhibited such viciousness and such a blatant disregard for the life of the deceased, and are so grievous an affront to humanity and so abhorrent that the death penalty is the appropriate, indeed the only adequate sentence".

The court noted that the death penalty, being the "final and ter-minal sentence", should be imposed only after "the most anxious consideration".

Chia abducted the victim, material analyst Dexmon Chua Yizhi, 37, near his Choa Chu Kang flat, forced him into the back of a van and severely assaulted him between Dec 28 and Dec 29, 2013.

The Singaporean had an accomplice, Indonesian Febri Irwansyah Djatmiko, 35, who fled the country.

A second accomplice, Chua Leong Aik, 67, who drove the van, is serving a five-year term.

The victim's body was later dumped in a military live firing area in Lim Chu Kang. 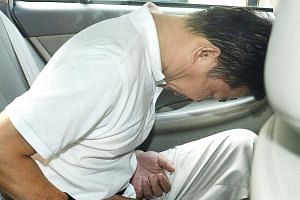 Explaining its reasons for imposing the death sentence, the court said Chia was the mastermind as he wanted to exact revenge on the victim for carrying on an affair with his wife, who is 52 this year.

Although the defence argued that Febri was the one who inflicted the blows, the court pointed out that he was doing so under Chia's directions.

"One who hires an assassin to kill another or who otherwise controls a killer cannot be less culpable than the one who does the killing," said Chief Justice Sundaresh Menon, who delivered the judgment.

The court added that Chia did not tell Febri to stop attacking the victim, but joined in the assault.

The court also said Chia showed a high degree of planning and premeditation. He was familiar with the victim's movements, recruited accomplices, procured a van and knew where to dump the body.

The attack on the victim was "undeniably vicious and brutal", said the court. Almost every facial bone, from the victim's eye socket to the lower jaw, was fractured. Blood was found on the ceiling, rear door and side of the van.

The court also noted that after dumping the body and washing the van, Chia calmly left for Malaysia with his wife and daughters for a holiday, using the opportunity to take Febri out of Singapore.

Referring to Chua's police statements, the court said the picture that emerged was that Chia wanted the victim to suffer as much as possible. "The only regret that Chia ever expressed was that the deceased had died before he could cause the deceased even more suffering."

In 2004, freelance Taoist priest Tony Koh Zhan Quan, 36, and coffee shop assistant Lim Poh Lye, 44, were charged with the murder of a scrap car dealer, who was stabbed seven times.

The body of Mr Bock Tuan Thong, 56, was found stuffed in the boot of a Mercedes-Benz in a multi-storey carpark in Boon Keng Road.

In 2005, after a 12-day trial, a High Court judge cleared the duo of murder and found them guilty of the lesser offence of robbery with hurt.

Lim was sentenced to the maximum jail term of 20 years with 24 cane strokes, and Koh, 15 years with 20 strokes.

The prosecution appealed, arguing that the trial judge had erred in interpreting the law.

A three-judge Court of Appeal agreed and convicted the duo of murder, which carried the mandatory death penalty at the time.

In 2010, Jabing Kho was convicted of murder and sentenced to the mandatory death penalty by the High Court for bashing to death a Chinese national while robbing him.

His appeal was dismissed in 2011, but he was given a lifeline as hangings were put on hold when the Government began a review of the mandatory death penalty that year.

In 2013, changes to the law kicked in, giving judges discretion to impose life imprisonment in certain murder cases.

Kho applied to be re-sentenced, and was given life imprisonment. The prosecution appealed against the decision.

In 2015, a five-judge Court of Appeal ruled, three to two, that Kho would hang.

The landmark decision provided guidelines on when the death penalty was warranted and when it was not mandatory.