A bomb was detonated, rapid gunfire was exchanged and acrid smoke filled the air at Tampines West MRT station yesterday.

It was all part of a simulated terror attack at the Downtown Line station, involving two gunmen and a suicide bomber.

Called Exercise Quicksand, it was a public transport contingency exercise conducted by the Singapore Police Force and supported by Singapore Civil Defence Force, Land Transport Authority and SBS Transit. About 120 role players and observers from the agencies took part.

The exercise began at around 1pm when the two gunmen, who were carrying bulky backpacks, entered the MRT station.

A shoot-out ensued when transport security officers tried to detain the gunmen. Three commuters in the station took cover behind a wall to report the attack to the police via an SMS to 71999. One of the commuters was shot and the other two performed first aid on him.

Police officers then arrived at the scene and subdued the gunmen.

Meanwhile, a third man wearing a denim jacket had trailed behind the gunmen and was able to get to the train platform unnoticed. 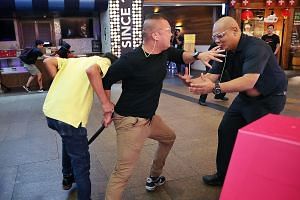 Terror threat to S'pore remains high, but only one in five sees it as an imminent threat: MHA report

No let-up in guard against terrorism

He detonated a bomb attached to his vest, but everyone in the station had been evacuated by then.

Exercise Quicksand was over in 45 minutes.

In 2014, a similar anti-terror exercise for public transport operators was held at Dhoby Ghaut MRT.

Minister for the Environment and Water Resources Masagos Zulkifli, who observed the exercise, said it was important to always be prepared, be it by having agencies work together to run such exercises or reminding the public that terror attacks could happen.

For a country like Singapore, "which is a prize for any terrorist (attackers) to boast about, we are vulnerable and therefore have to be prepared as much as possible", he said .

"Even in preventing such perpetrators from forming a base in Singapore for indoctrination and extreme views, we must do our best," said Mr Masagos, who is also Minister-in-charge of Muslim Affairs and an MP for Tampines GRC.

The exercise is part of SGSecure - the national terrorism awareness movement - and aims to enhance the security preparedness and joint response between the Home Team agencies, public transport operator and the community through a simulated terror attack in an MRT station.

"The exercise demonstrates that when the community is prepared, with the necessary skills and knowledge, it can help to save lives."