SINGAPORE - A part-time waitress lent her spare mobile phone to a Facebook "friend" on learning that he did not have one, but ended up being hounded by him when he demanded to be reimbursed for the cost of repairing the phone.

Things came to a head when the two had an argument at a multi-storey carpark in Toa Payoh Lorong 2, which culminated in Ms Atika Dolkifli, 23, plunging 6.5m head-first to her death. Her body was found only three days later on the landing of a lower floor.

Details of the events leading to Ms Atika's death emerged in the High Court on Tuesday (Feb 20) when the man accused of killing her, Syed Maffi Hasan, 27, went on trial for murder.

Syed Maffi, who is unemployed, had initially denied having anything to do with her death, lying to the police that they had met but he did not see her again after she left to "meet her new boyfriend".

It was only when he was confronted with surveillance footage of him entering the carpark with the victim and leaving alone with her handbag, that he confessed that he had attacked her in anger.

However, he may be challenging the admissibility of his confession during the trial. 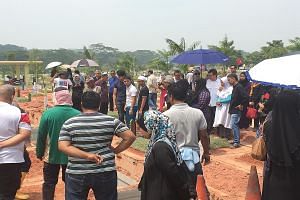 Deputy Public Prosecutor Bhajanvir Singh told the court on Tuesday that according to Ms Atika's parents, she had a "lower than average intelligence" level but was able to work as a waitress at a Pizza Hut outlet.

Ms Atika first met Syed Maffi on Facebook in 2013. They reconnected in April 2015 after he was released from a drug rehabilitation centre.

When the phone that she lent him him developed problems, Syed Maffi spent about $135 on repairs. But he lied to her about the cost and sought an inflated reimbursement of about $300 from her.

He turned up at her workplace multiple times, and her colleagues will testify that she was afraid of him and tried to avoid him, said the DPP.

Syed Maffi also went to her home but was turned away by her father. Her older brother later resolved the issue by telling Syed Maffi to keep the phone and warning him not to contact Ms Atika again.

While surveillance cameras captured them walking into the carpark, there was no footage of what transpired inside.

Syed Maffi claimed that they had sex on a staircase at the carpark. He claimed they later went to the roof, where Ms Atika demanded her phone back and used vulgarities on him.

The prosecution says this account is not supported by any objective evidence.

However, the prosecution says what happened later is supported by forensic evidence.

Syed Maffi admitted that he pushed Ms Atika's chest, causing her to fall down a flight of stairs and hit the back of her head on the edge of a step. He then dragged her off the remaining steps to Deck 5A, then grabbing her by her collar and trousers.

However, it is now a matter of contention whether he had then thrown her over the railing of the parapet or had simply placed her there.

After she fell, Syed Maffi collected her scattered belongings. He left her handbag inside a covered drain on Lorong 1 Toa Payoh, but not before taking out Ms Atika's own phone.

Ms Atika's father made a missing persons report on the night of Sept 1.

The next day, Syed Maffi lied when questioned by police. He maintained the false account even after her body was found, and admitted attacking her only after being confronted with surveillance footage.

He later led investigators to Ms Atika's bag and was taken back to the scene, where he demonstrated, with a dummy, how he had thrown her off the railing, said the DPP.

If convicted of murder, Syed Maffi faces the death penalty or life imprisonment.