A police senior staff sergeant who purposely damaged a walking stick belonging to former businessman Zeng Guoyuan claimed that he had stepped on it when he "lost his balance".

Seah Chin Peng, 48, also told Inspector Paige Tan another untruth by stating that the $28 walking stick was later thrown away by members of the public during the incident which happened on Oct 31, 2016, in Waterloo Street.

But footage from a body-worn camera used by Sergeant Durganivashini Yogendran showed Seah deliberately stepping on Mr Zeng's walking stick before arresting him. The clip also showed Seah placing it in a police car and then driving away.

Mr Zeng earned the nickname Parrot Man after blaming his pet parrot for getting him arrested and charged with using abusive language on two police officers. He was later fined $2,500. 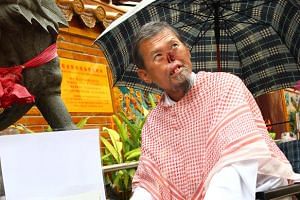 On the day of the incident, the police received a complaint that Mr Zeng was "begging and causing nuisance" outside the Kwan Im Thong Hood Cho temple in Waterloo Street.

When Seah and Sgt Durganivashini arrived at around 10.30am, Seah asked to take a look at Mr Zeng's walking stick and the older man handed it to him.

Deputy Public Prosecutor Deborah Lee said that Seah then stepped hard on the walking stick, causing it to become bent. Infuriated by this, Mr Zeng hurled vulgarities at Seah who arrested him for disorderly behaviour and using abusive language against a public servant.

Mr Zeng was taken to the Central Police Divisional Headquarters but the court heard that no further action was taken against him.

DPP Lee and Deputy Public Prosecutor Peggy Pao stated in their submissions that Seah had admitted that "it was not in accordance with proper procedure to intentionally damage an arrested subject's property". They added: "He knew that such an act could give rise to negative consequences, including disciplinary action being taken against him."

Responding to queries from The Straits Times, the police said that they have started disciplinary proceedings against Seah following his conviction yesterday.