A driver who sparked a manhunt after speeding off from Tuas Checkpoint last year had feared the discovery of the undeclared "Ramly" beef patties hidden in his car.

Mohamed Dawood R.M. Abdul Sukkur, 48, had turned to importing traditional cakes and pastries to support his 10 children during the Muslim fasting month of Ramadan, a district court heard yesterday.

Dawood, who owns a struggling car-grooming company and a food distribution firm, had even worked part-time as an Uber driver.

He tried to smuggle in the beef patties to sell them to night market shops for a profit. Fearing he would get caught for unlawfully importing nearly 40kg of the patties, Dawood sped off from an inspection pit at Tuas Checkpoint in June last year during the first week of Ramadan.

Yesterday, he was jailed for nine months and fined $8,000 for a spate of crimes. He will also be barred from driving for three years after his release from prison.

Dawood pleaded guilty to four charges: obstructing a Customs officer, perverting the course of justice, importing a meat product without a licence and dangerous driving. 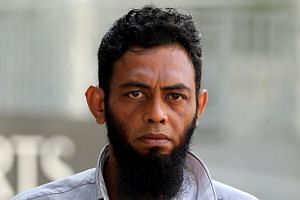 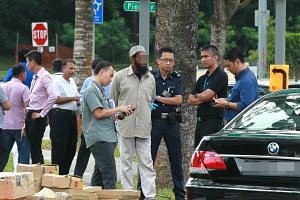 Four other related charges were considered in sentencing.

The court heard that Dawood drove to Malaysia at about 7am on June 23 last year, in a rented black BMW car, to collect cakes and pastries to supply to shops here.

He also went to a supermarket in Bandar Baru, Johor, to buy 105 packets of Ramly beef patties, weighing about 37.8kg in total, for RM400. He hid the patties in the car's spare tyre compartment and reached Tuas Checkpoint at about 11.35am.

After he had cleared immigration, immigration officers found discrepancies in his goods import permit and directed him to a full inspection pit for more checks.

While driving towards the pit, he realised the beef patties would be discovered, the court heard. "(Dawood) thus decided not to comply... He stepped hard on the car accelerator and sped off," said Deputy Public Prosecutor (DPP) Mansoor Amir.

He next drove at about 88kmh on the slip road, at about 140kmh on the PIE from Tuas Road to Pasir Laba Flyover towards the East Coast Parkway, and then at about 90kmh from the flyover to PIE exit 38.

The car broke down at about 12.20pm along the PIE towards Changi Airport near Pioneer Road North exit 38 and the entrance of Nanyang Technological University.

"Aware that the police would soon catch up with him and the... beef patties would incriminate him, (Dawood) thus disposed of the 105 packets of Ramly beef patties," said DPP Mansoor. The businessman threw the patties into an open drain along the PIE towards Changi Airport before PIE exit 38.

Among other things, police officers found 145 boxes or packets of traditional cakes and pastries weighing 200kg, some in the car and some on the grass verge next to it.

"He is self-employed in the car- grooming business and earns a low income because his business is struggling to survive amid heavy competition. During... Ramadan, he usually imports traditional cakes and pastries... and makes a small profit to help sustain his family."

District Judge Lee Poh Choo told Dawood: "Entrepreneurship is encouraged but this is certainly not the way to go about it. From start to end, you contravened the law."