The 17-year-old was sentenced two weeks ago, on Sept 29, but was allowed to defer his jail term.

He had pleaded guilty to eight charges - two for failing to turn up at a police station and six for intending to wound the feelings of Muslims and/or Christians.

On July 6 last year, Yee was given four weeks' jail for making remarks that were derogatory and offensive to Christians in an online video and for uploading an obscene image on his blog.

But he was released the same day as the punishment was backdated to include his time in remand. He had spent about 50 days in prison after repeatedly breaching bail conditions.

Four months later, Yee, posted an expletive-laden video on the Internet which aimed to hurt the feelings of Muslims. He later made one blog post, and uploaded one photo and two other videos to hurt Muslims. He also posted a video online to wound Christian feelings. 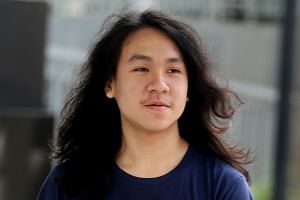 On Dec 14 last year, he failed to show up at Jurong Police Division, despite a police officer's notice. He did not turn up at the same place again on May 10, after a magistrate's order was issued.

But the judge said: "(Yee) has, on several occasions, deliberately elected to do harm by using offensive and insulting words and profane gestures to hurt the feelings of Christians and Muslims.

"His contemptuous and irreverent remarks have the tendency to generate social unrest and undermine the religious harmony in our society."

In addition to the jail term, Yee was also fined $2,000. If he does not pay his fine, he will have to spend another 10 days in jail.