Handling of S'pore's cross-border ties a key theme for AGC over past year, Lucien Wong says at opening of legal year

Singapore needs to build and manage its network of relations with other countries, and as a small state, the law is an important tool which enables it to do so, Attorney-General Lucien Wong said.

He was speaking at the Opening of the Legal Year 2019 at the Supreme Court yesterday, where he noted that the management of the Republic's cross-border relationships was a key theme for the Attorney-General's Chambers (AGC) over the past year.

"We, as Singaporeans, have grown up with the mantra that Singapore as a small nation-state has no hinterland and is dependent on trade and human connections to thrive," he told members of the legal community, in underlining the law's role in maintaining Singapore's ties with other states.

"It has been a challenging year in this regard, with our bilateral ties with our closest neighbour put to the test," he added. "As a small country, Singapore is never immune from political changes in neighbouring countries, especially Malaysia."

Mr Wong noted that while the dispute over Pedra Branca ended amicably with Malaysia withdrawing its applications about two weeks before their scheduled hearing at the International Court of Justice, the change in government across the Causeway has had significant impact on ongoing bilateral projects, such as the planned Kuala Lumpur-Singapore High-Speed Rail.

"Our officers were on hand to advise the Government on this matter, working in support of the negotiating teams," he said. "The outcome was a positive and balanced one, resulting in a mutually agreeable resolution between both countries that also ensured that Singapore's interests were safeguarded."

The AGC recently continued its support of the Government on a number of issues concerning Malaysia, he added, citing three cases: The purported extension of Johor port limits into Singapore territorial waters, airspace management over southern Johor and the review of water prices under the 1962 Water Agreement with Malaysia. 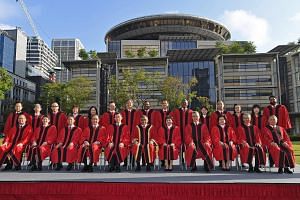 Singapore has described Malaysia's unilateral extension of Johor Baru port limits on Oct 25 and repeated intrusions by Malaysian government vessels into the Republic's waters as a serious violation of Singapore's sovereignty and international law.

Malaysia has also objected to new landing procedures for Seletar Airport and wants to review the price of water supplied to Singapore.

In a speech at an education bursary event on Sunday, Prime Minister Lee Hsien Loong touched on a similar theme. He noted that while Singapore is friends with its neighbours, issues crop up from time to time.

"We need to know how to deal with our neighbours... to maintain good relations with them, to cooperate with them but at the same time to look after our interests and stand up for Singapore," he said.

"You would understand and you would learn that this is the world where we would have to stand up for ourselves... and look after ourselves together as one people so that, small as we are, this little red dot can thrive and can prosper," PM Lee added.

A version of this article appeared in the print edition of The Straits Times on January 08, 2019, with the headline 'As a small state, law is key tool in managing ties with others: A-G'. Subscribe
Topics:
More
Whatsapp Linkedin FB Messenger Telegram Reddit WeChat Pinterest Print Purchase Article Copy permalink