He was responding to Mr Cedric Foo (Pioneer) on whether the Ministry of Home Affairs (MHA) would consider sending at-risk children to boarding school.

Mr Foo was one of four MPs who asked Mr Amrin about the support available to the children and families of drug offenders.

Mr Amrin said his ministry would consider the suggestion. He noted that there are other family members who can help when the parents of vulnerable children have been incarcerated.

"So, we have to do our best in an imperfect situation because we recognise that parents play a very big role in the lives of children," he said.

"Given this imperfect situation, relatives would have to come in, the community would have to rally and help to fill in the gaps."

Other MPs had asked for the number of drug offenders with children at home and about youth outreach programmes and measures to prevent generational cycles of addiction.

Responding to Ms Lee Bee Wah (Nee Soon GRC) and Mr Melvin Yong (Tanjong Pagar GRC), Mr Amrin said MHA does not track the number of drug offenders with children at home or the number of children who follow in their parents' footsteps and become drug abusers. 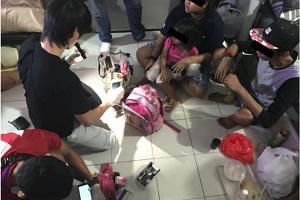 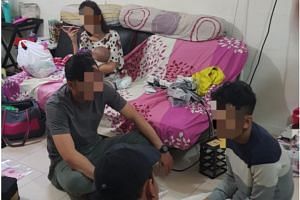 He acknowledged that there is a real risk of children taking after their parents and abusing drugs.

Nevertheless, he pointed to programmes that have been put in place to support families and children of drug offenders.

There are other initiatives such as mentorships, tuition support and parenting skills workshops.

In 2012, the Home Team had introduced a Youth Engagement Programme targeting those at risk via sports and youth camps, said Mr Amrin.

In addition, the National Committee on Prevention, Rehabilitation and Recidivism was set up in April this year to "facilitate collaborative efforts in research and data sharing" and coordinate efforts to address the issues of offending and re-offending.

Mr Louis Ng (Nee Soon GRC) asked if the ministry could collect data to measure trends and the effectiveness of the various programmes.

Mr Amrin replied that there were challenges in collecting such data, citing how spouses may lose contact with each other as some family relationships crumble.

"But we are nevertheless trying," Mr Amrin said. "We have a rough sense. We are not able to share because there needs to be more work put into this."

A version of this article appeared in the print edition of The Straits Times on October 03, 2018, with the headline 'Anti-drug steps in place but family is first line of defence for at-risk kids'. Subscribe
Topics:
More
Whatsapp Linkedin FB Messenger Telegram Reddit WeChat Pinterest Print Purchase Article Copy permalink