In court on Friday (Jan 12), retail firm Synnex Trading and its director Jia Xiaofeng, and trading firm An-Nahl and its director Abdul Nagib Abdul Aziz faced several charges, in what could be a landmark case to determine the legality of media streaming boxes.

Their accusers allege that they "wilfully infringed" copyright to a significant extent by helping people access pirated content via media streaming boxes, charging them under Section 136 (3A) of the Copyright Act.

Mr Neil Gane, general manager of the Coalition Against Piracy (CAP), appeared in court on behalf of the entertainment content providers and pay-TV operators. He was listed as the complainant in this criminal case.

Synnex and its director each face four charges for helping customers "make unauthorised copies" of programmes - including English Premier League matches, and other sports, movies and National Geographic documentaries on Fox's cable channels - by using the media boxes. The accused were caught on three occasions in May, August and September last year at Synnex's Geylang Road shop.

Synnex and its director were also charged over the possession of 104 media boxes specifically adapted for making copies of the copyrighted content in May last year at Synnex's shop. Synnex was believed to have charged customers $159 for the media box, with each streaming app costing an extra fee ranging from $40 to $170.

An-Nahl and its director face two charges each of helping a customer use the media box to make unauthorised copies of English Premier League matches and Fox programmes, and carrying 12 media boxes - both in May last year - at Tanjong Katong Complex, where the shop is located.

Conviction carries a jail term not exceeding six months, a fine of up to $20,000, or both. 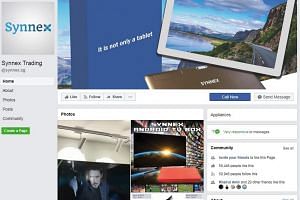 The boxes run on the Android smartphone operating system. They often come pre-loaded with apps that can access pirated content, and have been the scourge of pay-TV operators and content publishers. Each box sells for as little as $219, as marketed on Synnex's Facebook page.

The CAP was formed last October by video content creators and distributors in Asia to fight the use of media boxes for piracy and the app networks that underpin them.

Its members include the Cable and Satellite Broadcasting Association of Asia (Casbaa), which has StarHub and Singtel as members, as well as Fox, Premier League and HBO Asia.

The criminal proceeding comes after years of lobbying the local authorities, with no success, to conduct raids on Android TV box syndicates.

Last month, the CAP asked the Singapore Government to block software residing in media boxes sold at local electronics stores and e-commerce sites such as Lazada.

In a joint statement on Friday, Singtel, StarHub, Premier League and Fox said: "The alarming proliferation of piracy and illicit streaming devices that are used to view copyright protected content hurts both consumers and producers... we will continue to take concerted and decisive action against content piracy through public education as well as via legal channels to uphold intellectual property rights."

“Respect for intellectual property is key as we seek to grow our media and innovation ecosystems,” they added.