Sales executive Lee Sze Yong is on trial for kidnapping the mother of Sheng Siong supermarket boss Lim Hock Chee two years ago, but it emerged yesterday that his first target was the children of billionaire Peter Lim.

From as early as 2010, Lee, 44, had harboured plans of getting rich from ransom money, the High Court heard.

The list of his potential targets reads like a who's who of Singapore's rich and famous, including BreadTalk founder George Quek, "popiah king" Sam Goi of Tee Yih Jia Group and Fragrance Group executive chairman Koh Wee Meng.

The details were revealed when eight statements Lee had given to the police after his arrest were admitted as evidence through the investigating officer, Deputy Superintendent Burhanudeen Haji Hussainar.

Lee was questioned by the police about an organiser and stacks of documents seized from his car and flat after he was arrested for kidnapping Madam Ng Lye Poh on Jan 8, 2014.

In the organiser, Lee had neatly jotted down information he had gathered on several wealthy people - their identity card numbers, how much they were worth, where they lived, the names of their children and the schools they attended, and the times they left and came home.

Lee told police that he found out the home addresses by buying business information from the Accounting and Corporate Regulatory Authority (Acra) before staking out their homes and recording his observations in the organiser.

Lee, who was saddled with credit card debts of nearly $200,000, told the police that after reading the Forbes list of richest people years ago, it struck him that he could kidnap someone and demand a ransom to clear his debts.

The first people he thought of kidnapping were Mr Peter Lim's children. He told police that he had read in the newspapers that the full-time investor was "cash rich".

Lee staked out his condominium near the Shangri-La hotel and took note of the cars coming in and out, but did not see the billionaire. He also went to the River Valley condominium of his former wife, Madam Venus Teo. He saw her on his second visit and recorded his observations in his organiser.

Lee said he planned to kidnap Mr Lim's son, who was then 18, and demand a $50 million ransom, which was just 2 per cent of his net worth. Lee drafted a ransom note threatening to post naked pictures of the boy online, but maintained to the police that it was "just a thought", and he never carried out his plan.

Lee also followed Mr Quek on three occasions when he left home for his weekday morning exercise at the Botanic Gardens.

He observed the movements of Mr Quek's family members, taking note of his sons' school uniforms and the licence plate of the car that ferried them to school.

He also carried out recce trips to places in Singapore which he thought were good for collecting ransom cash. 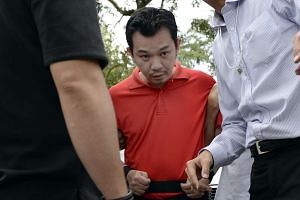 Sheng Siong kidnapping trial: Suspect even had a 'spending plan' for ransom money

"Good. Dead End.", he noted in his organiser about Bottle Tree Village in Sembawang.

In the same organiser, Lee noted down the things he might need to carry out his kidnapping plan.

Lee told police that in 2011, he started preparing items he believed were necessary to carry out a kidnap.

He bought pepper spray from Kuala Lumpur, a Taser gun from Bangkok, skin-colour face masks from eBay and fake car plates from Johor Baru. He also bought duct tape, ropes, and a dress and headscarf for him to disguise himself as a Muslim woman.

He even considered getting items such as fake blood stains to put on the victims before taking photos to send to their families.

Despite doing the research, he did not make any concrete plans.

In 2013, he read that Sheng Siong's Mr Lim was worth more than $500 million and started staking out his house in Hougang.

On his multiple visits, he noticed an elderly woman leaving the house at about 9am, but did not know how she was related to Mr Lim.

Lee said he made at least six more visits to study her movements and decided to target her.

On Jan 8, 2014, after renting a Honda Civic, he approached her at an overhead bridge and asked her in Hokkien if Mr Lim was her son.

After she confirmed that he was, he tricked her into getting into his car by lying that her son had a fall in the office. Lee later phoned Mr Lim and demanded $20 million by that same night, but decided to settle for Mr Lim's counter-offer of $2 million.

Madam Ng is expected to take the stand today.