It could have used ads or concerts, instead of spending $24m on Ho's music career, he says

There are cheaper ways to evangelise than the $24 million that City Harvest Church (CHC) spent on Ms Ho Yeow Sun's pop music career.

The church could have bought television or newspaper advertisements. Or it could have organised Korean pop concerts, with CHC senior pastor Kong Hee preaching afterwards.

Instead the way it went about spreading its gospel was "very extravagant", said Justice Chan Seng Onn in the High Court yesterday.

Justice Chan is one of three judges hearing the appeal of the six CHC leaders convicted of misappropriating millions in church funds to promote Ms Ho's career in a mission known as the Crossover Project. Yesterday was the close of the five-day hearing, and a judgment will be delivered at a later, as yet unknown, date.

Of the many ways to evangelise, Justice Chan said: "It can be through Sun Ho singing, (or) it could be engaging, at a much cheaper cost, maybe K-pop (singers) and Kong Hee can come to the concert and then preach." 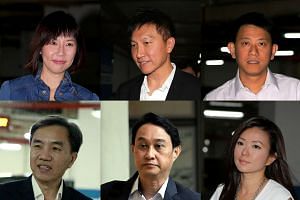 He spoke as the prosecution was presenting its arguments. It wants longer sentences for all six CHC leaders, who face terms of between 21 months and eight years. It is asking for terms of between five and 12 years instead.

The six CHC leaders are appealing against their conviction and sentences.

In October last year, the lower court found the CHC leaders had ploughed $24 million from CHC's building fund into bogus bonds used to fund the music career of Ms Ho, who is Kong's wife. Another $26 million was used to cover up the initial misdeed.

Justice Chan asked if members had supported the means in which the Crossover was carried out.

Later, Judge of Appeal Chao Hick Tin also asked if the CHC leaders had been carrying out what they thought was a church purpose - "only they took the wrong route or the wrong means".

But DPP Ong said it was more important for the court to ask if church members supported the Crossover because they were not given the full facts about it.

Offering an analogy, he said: "If I were to offer you a Ferrari and I tell you that it is free of charge, you might well take it because, why not, it's free.

"If I tell you that I'm going to give you a Ferrari but use your money to pay for it, you may not be so supportive of the idea of my giving you a Ferrari."

He also told the court the six had not shown remorse - which ordinarily would be a mitigating factor.

"Restitution amounts to saying 'I am sorry', and this is not something we have heard from the offenders in this case," he said.

During the five-day hearing, lawyers for the five CHC leaders, and former CHC fund manager Chew Eng Han, who is representing himself, delivered impassioned arguments - often before a courtroom packed with over 50 people.

FREE FERRARI, BUT WHO'S PAYING?

DEPUTY PUBLIC PROSECUTOR CHRISTOPHER ONG, saying church members supported the Crossover Project because they were not given the full facts.

They stressed that the bonds used to fund the Crossover were genuine investments. Furthermore, the Crossover, which aimed to create "a megastar" in Ms Ho - who would attract non-Christians who could be preached to at her concerts - was a project that was supported by the church, said the lawyers.

At the close of yesterday's hearing, Justice Chao adjourned the case to give the judges time to go through the trial's voluminous record.

No date for a judgment was given by Justice Chao, who said: "This is something we need to give special consideration to... we can only promise you a judgment ASAP."