SINGAPORE - Car workshop owner Tan Boon Sin was such a good boss, he continued to pay the full salary of a mechanic who went back to Malaysia for six months to take care of his ailing wife.

This glimpse into the life of 67-year-old Mr Tan, one of the two victims of the Kovan double murders in 2013, emerged on Tuesday (Dec 8) when his family held a press conference at the porch of the Hillside Drive house where the killings took place.

It was the first time that they have spoken to reporters since policeman Iskandar Rahmat was sentenced to death last Friday for the murders of Mr Tan and his elder son Chee Heong, 42, on July 10, 2013.

Iskandar had hatched a plan to trick Mr Tan into taking his valuables from a Certis Cisco safe deposit box and then steal them. The High Court found that he had intended to kill Mr Tan from the outset, and when Chee Heong stepped into the house, Iskandar decided to silence him as well.

Mr Tan's daughter Siew Ling, 42, revealed that they also learnt first-hand during the trial of the extent of the knife injuries suffered by her father and brother.

Kovan Double Murder: Family of victims hope to put closure to the case 2

Younger son Chee Wee, 41, a restaurant owner, said that the verdict was "expected" but it did not heal the pain the family members continued to feel.

"A happy family was broken in seconds. Life has changed for us totally," he said, adding that he woke up every day still hoping that what happened was just a bad dream.

Kovan Double Murder: Family of victims hope to put closure to the case 1

Their mother, Madam Ong Ah Tang, continues to live alone in the house. "It's a very comfortable place, we grew up here," said Siew Ling when asked if the family had any plans for the house. "She's been here for 20 years."

Madam Ong was not present but her children praised her for being "courageous" in taking the stand on the first day of the trial as she had lived her life as a simple housewife. 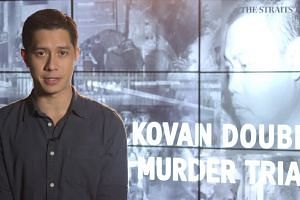 Siew Ling has taken over the running of Mr Tan's car workshop business for the past two years.

Mechanic Chai Siew Fong, 56, who has worked for Mr Tan for more than 30 years, shared how his boss paid him even though he could not work. He said he was grateful to Mr Tan and will continue to work at the business for as long as he could.

He revealed that soon after the killings, the family received flowers from people expressing condolences, even from a total stranger from the Philippines. Siew Ling also spoke of a churchgoer they did not know who prayed for the family and attended the court hearings.