Police, prosecution retain independence in deciding whether to pursue case, he says

The Government has not removed or restricted prosecutorial discretion for Section 377A, Attorney-General Lucien Wong said in a statement released yesterday.

He noted that former attorneys-general Walter Woon and V.K. Rajah "have recently suggested that it is not desirable for the Government and Parliament to direct the public prosecutor (PP) not to prosecute offences under Section 377A of the Penal Code, or to create the perception that they are doing so".

"Such comments may give rise to the inaccurate impression that the exercise of the PP's discretion has been removed or restricted in respect of Section 377A."

Mr Rajah had written a commentary in The Sunday Times this week in which he noted that "from a legal point of view, the assurance given in Parliament that Section 377A (the provision that criminalises sex between men) although not repealed will not be enforced, is constitutionally unsatisfactory".

On the Ready4Repeal website, National University of Singapore law professor Woon said: "We cannot have a crime which is not enforced. The Government should not tell the public prosecutor that some things are crimes but there will be no prosecution."

A-G Wong stressed that the police, when conducting investigations into an offence under 377A, "will decide whether or not there is sufficient basis to refer the case to the PP". "It will then be for the PP to determine whether to prosecute. In doing so, the PP exercises his independent discretion on whether to charge the offender, solely on the basis of his assessment of the facts, the law and the public interest.

"While the PP is entitled to consider public policies in exercising his discretion, these do not fetter the exercise of prosecutorial discretion." 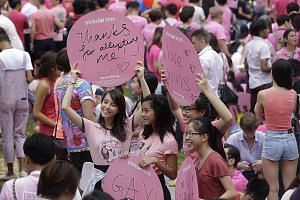 He also noted that "the Government's position on Section 377A is that the police will not proactively enforce this provision, for instance, by conducting enforcement raids".

"However, if there are reports lodged by persons of offences under Section 377A, for example, where minors are exploited and abused, the police will investigate."

To illustrate this point, he cited an example of how, in 2008, then Deputy Prime Minister and Minister for Home Affairs Wong Kan Seng "explained that in the case of an offender who had been charged under Section 377A of the Penal Code, a police report was lodged by a 16-year-old male who had oral sex with the suspect".

The police referred the case to the PP after completing investigations, A-G Wong said, and the PP "decided to charge the accused under Section 377A after taking into account all the facts and circumstances of the case, including the complainant's age and the fact that the offence had taken place in a public toilet".

A-G Wong noted: "The PP’s exercise of prosecutorial discretion has always been, and remains, unfettered. In the case of Section 377A, where the conduct in question was between two consenting adults in a private place, the PP had, absent other factors, taken the position that prosecution would not be in the public interest. This remains the position today."

The Supreme Court of India's decision on Sept 6 to strike down Section 377 of the Indian Penal Code, which made consensual gay sex a crime, renewed the debate about Section 377A here, with some prominent Singaporeans, including veteran diplomat Tommy Koh, urging a court challenge to the law .

Several religious organisations in Singapore have spoken out against repealing the law, including the National Council of Churches of Singapore and the head of the Catholic Church in Singapore, who said the law should not be repealed undercurrent circumstances. The Singapore Islamic Scholars and Religious Teachers Association said a repeal of Section 377A could cause several "worrying implications".

A committee which was set up in 2016 to conduct a wide-ranging review of the Penal Codesubmitted its 500-page report and recommendations to Law and Home Affairs Minister K. Shanmugam on Aug 31.

Among its 169 recommendations, it called for marital immunity for rape to be removed and for attempted suicide to be decriminalised. It also proposed further protection for minors from sexual predators, as well as enhanced punishment for crimes committed against children, maids and adults with mental or physical disabilities who cannot fend for themselves.

Section 377A was not part of the review.

A version of this article appeared in the print edition of The Straits Times on October 03, 2018, with the headline 'A-G: Prosecutor's discretion on Section 377A not curbed'. Subscribe
Topics:
More
Whatsapp Linkedin FB Messenger Telegram Reddit WeChat Pinterest Print Purchase Article Copy permalink