SINGAPORE - A 63-year-old woman was fined $7,000 on Wednesday (Oct 3) for illegally importing 490 duck eggs that contained developing embryos into Singapore.

The Agri-Food and Veterinary Authority (AVA) and the Immigration and Checkpoints Authority (ICA) said in a joint statement that the woman, Le Thi Ung, bought the eggs, commonly known as balut, from a wet market in Vietnam.

She had put the 490 eggs, weighing a total of 78.4kg, in two styrofoam boxes in her baggage. When she arrived at Changi Airport last month, ICA officers conducted checks and found the eggs.

ICA then referred the case to AVA for investigation.

Le was later found to have contravened the Wholesome Meat and Fish Act for importing duck eggs from non-approved sources, said the AVA.

There are currently no approved sources for balut eggs.

Anyone who illegally imports meat products from unapproved sources can be fined up to $50,000 and jailed for up to two years. 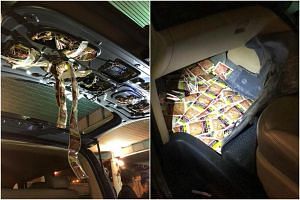 More than $190,000 worth of cigarettes hidden in floorboard of bus seized

A repeat offender will face a harsher punishment, with a fine of up to $100,000 and jail time of up to three years.

AVA said import of food, including meat and eggs, are regulated for animal health and food safety reasons. Illegally imported food products from unknown sources can pose food safety concerns and can introduce diseases such as bird flu into Singapore, said the authority.

"While Singapore is free from bird flu, the disease is endemic in the region. Illegally imported food products, which may not have undergone the necessary heat treatment to inactivate the virus (which causes the disease), is a risk for public and animal health," AVA added.

Both AVA and ICA also said that travellers are reminded not to bring meat products into Singapore without a proper license.

Those who want to find out their allowance for meat products from overseas travels can refer to AVA's website or its SG TravelKaki mobile app for more information.