SINGAPORE - Six people will be charged in court in separate cases of using abusive language and criminal force, and voluntarily causing hurt to public servants, the police said in a statement on Thursday (June 6).

On April 28, 2018, a 47-year-old man insulted a police officer and bumped him with his head and shoulder during a routine spot check along Yishun Ring Road.

On Oct 27, 2018, a 20-year-old woman held a police officer in a choke-hold by his neck and pushed him while he was attending to a dispute along Orchard Road.

On Dec 22, 2018, a 55-year-old man hurled vulgarities at a National Environment Agency enforcement officer when he was being issued a summon for smoking at a prohibited area along Jurong East Central 1.

On Jan 20 this year, a 36-year-old man pushed and hurled vulgarities at a parking warden who was carrying out parking enforcement duty along Pandan Loop. 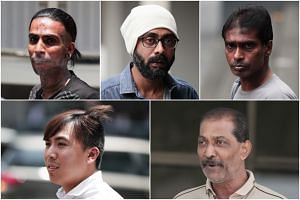 On Feb 12 this year, a 51-year-old woman assaulted two auxiliary police officers who were deployed for Active Mobility Enforcement with the Land Transport Authority along Stirling Road.

Those convicted of using abusive language against a public servant can be jailed for up to 12 months, fined up to $5,000, or both.

If found guilty of voluntarily causing hurt to deter a public servant from the discharge of his duty, they can be jailed for up to seven years, fined, caned, or a combination of the punishments.

Using criminal force against a public servant is punishable with a jail term of up to four years, a fine, or both.

In the statement, the police said that they have zero tolerance towards acts of violence against public servants who are carrying out their duties, and they will not hesitate to take action against those who disregard the law.