SINGAPORE - Two senior citizens were among seven men in court on Monday (Oct 14) over molestation charges.

Lim Ah Bah, 73, faces four charges in total, the most of all the accused.

He is charged with two counts each of molestation and insulting a woman's modesty. These cases are said to involve the same victim - a 40-year-old woman.

Lim allegedly committed all the offences at Xin Hua TCM Clinic, which is at the 100 AM mall in Tanjong Pagar, at around 1pm on Oct 1 last year.

It was not stated in court documents if he was working there at the time.

Lim allegedly touched the woman's private parts over her pants and asked her to apply some lubricating gel there.

According to court documents, he is also accused of touching her breasts and asking her "inappropriate questions" pertaining to her sex life.

Separately, 75-year-old Yan Kok Fatt was in court for allegedly molesting a 21-year-old woman at Midpoint Orchard shopping centre at around 12.30pm on June 4 this year.

He is said to have touched her breast and stomach over her clothes. 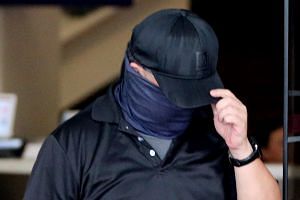 Jail, fine and caning for man who molested maid while family away on holiday

The 48-year-old man, who cannot be named owing to a gag order on the maid's identity, allegedly touched her left breast, among other acts, in a Serangoon Avenue 2 flat.

As for Ng, he allegedly touched a 26-year-old woman's breast along a sheltered walkway near Block 173 Gangsa Road in Bukit Panjang at around 2pm on March 22.

Ng is also accused of insulting her modesty by making a lewd comment about her body.

Loh, Salihin and Yusoof face one charge of molestation each.

Loh allegedly molested a 24-year-old woman at Orchard MRT station at around 3pm on June 5, while Salihin is said to have outraged a 20-year-old woman's modesty at the monorail platform of Resorts World station in Sentosa the following month.

In a statement on Sunday, police said that Yusoof allegedly molested a 31-year-old woman in a taxi along Lorong Ah Soo near Upper Paya Lebar Road on Jan 4.

It was not mentioned if he was the driver at the time.

The cases involving the 48-year-old man and Loh have been adjourned to next month. The other five men will be back in court later this month.

In the statement, police said that outrage of modesty cases have been on the increase and remain a key concern.

Offenders convicted of molestation can be jailed for up to two years and fined or caned.

Those above 50 will not be caned because of their age.

The first half of this year saw a slight increase of about 5 per cent in the number of molestation cases.

Statistics released by the police  showed that from January to June, there were a total of 837 such cases, up from 797 in the same period last year.