SINGAPORE - When the coronavirus began to spread across the island in February, Ms Paige Tuieng and her husband made the difficult decision to call off their May wedding.

After all, they had a small solemnisation ceremony last year and saw no point in postponing the larger celebration to an indeterminate date, Ms Tuieng told The Straits Times.

Six months on, the couple have been able to recover only about half of the $11,000 to $12,000 in deposits paid to various wedding vendors. Compounding their woes is the fact that Ms Tuieng and her husband are also stretched as they work in two of the industries hardest hit by the pandemic - events and aviation.

The ongoing crisis has upended a number of planned events for many people, leading to disputes between vendors that point to no-refund policies and consumers who argue that restrictions make it impossible to proceed with their plans.

The Covid-19 (Temporary Measures) Act was passed in April, allowing parties to events, tourism and other contracts to suspend their obligations for six months.

This means that couples at risk of forfeiting a deposit placed with a wedding venue, for example, can apply for an assessor appointed by the Ministry of Law to prevent this if the event was to be held on or after Feb 1, and booked before March 25.

Wedding vendors told The Straits Times they are exercising flexibility for existing bookings, but noted that they also have costs to bear.

A spokesman for Grand Park Orchard said that it works with third-party vendors and suppliers that provide ingredients, flowers and decor. "Some of these items are either perishables or items which we cannot keep stock of; it is not viable for businesses to bear these costs."

Still, the hotel has been allowing couples to postpone wedding banquets with at least three days' notice at no additional charge, given the current extenuating circumstances. Cancellation requests are reviewed on a case-by-case basis, it said. 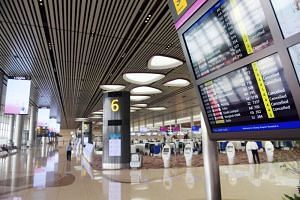 Caterer Chilli Api said up to 50 bookings for the year were affected by pandemic-related curbs, such as limits on wedding attendees and the circuit breaker. It has offered customers the option to cancel or delay banquets without penalty, and most have opted to postpone, said Mr Kuah Bing Cheng, business development manager for parent company Chilli Padi Holding. Losses have been minimal as sufficient notice has prevented food wastage, he said.

Raffles Hotel and Shangri-La Hotel, Singapore have allowed couples to cancel or postpone their weddings without penalty.

In response to queries, the Ministry of Law said that assessors consider the positions of both contracting parties before making a determination.

"The perception among some couples that they are entitled to a full refund is incorrect. The Act will help them to avoid losing all of their deposit, but the determinations must be fair to the vendor too," a spokesman said.

Ms Tuieng, who resorted to an assessor three times after being unable to reach an agreement with vendors, said the process helped the couple recover some money.

But the entire experience has been disappointing, she said. "I have always emphasised that I am not asking for a 100 per cent refund, and it doesn't have to be returned immediately. But they all ask for 50 per cent and can't justify it."

As an events emcee, Ms Tuieng, 31, has seen her income drop by up to 90 per cent. Five wedding ceremonies that she had been set to host have been postponed to next year, she said. "I am a vendor too, so I understand where they are coming from. But if you pay me and I don't work for it, it is not my money."

While sacrificing their wedding and some savings has not been easy, the episode has brought the couple closer together, Ms Tuieng said.

"I am thankful for the chance to see how we can complement each other and work things out together."