Madam Jung Kim Choo, 87, who has manned a ground-floor public toilet at Rochor Centre for almost two years, said she used to make $60 a day, but now earns about $6.

"In the past, this place was bustling... There would be so many Malaysians visiting and shopping," said Madam Jung, who is also a resident at the centre. She has lived there in a four-room flat with her daughter, 66, since it was built in 1977.

It does not help that many shops at the centre in the Bugis area have moved out. As of January, 106 out of 183 shops had already closed and moved away. 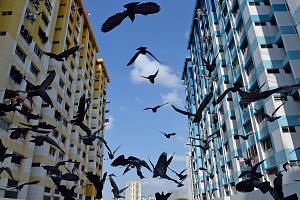 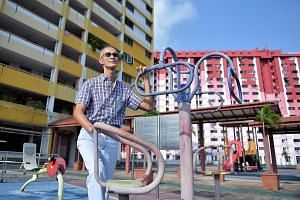 Long-time residents bid goodbye to Rochor Centre: 'Each neighbour is worth a million bucks'

It is already our third shift. First, (it was from) Blanco Court, then (from) Victoria Street, and now here. Even if I've made memories here, I will have to forget them all because we are moving yet again.

MRS YEO, a shopkeeper whose son is the owner of party supplies shop Yeo GM Trading, on moving out of Rochor Centre.

Rochor Centre will make way for the new North-South Expressway by the end of this year, and shop tenants said business has slowed since the announcement of the centre's closure.

The place used to be frequented by devotees buying religious goods on the way to nearby temples, such as the Kwan Im Thong Hood Cho Temple. But these days, only six of the 15 shops selling religious goods, such as statues of Buddhist and Hindu deities, are still open.

"Business is getting worse and worse. I close the shop at about 5pm each day as there is usually nobody after that," said Mr Ong Chin Lai, 68, an employee of 20 years at religious goods shop Sin Yong Long.

Rochor Centre's shop tenants have to move by Sept 30, but most of the shops that are still open have yet to find a new place.

Mr Kum Yuen Chuen, 56, owner of Hup Yick Furniture, which sells Buddhist and Taoist altars, said: "There are no more shops in Singapore with sizes as big and rent as cheap as the ones here.

"And I need the space to display my products, so finding a good replacement looks impossible."

Others, such as a shopkeeper who wanted to be known only as Mrs Yeo, were frustrated at yet another move. Said Mrs Yeo, 70, whose son is the owner of party supplies shop Yeo GM Trading: "It is already our third shift. First, (it was from) Blanco Court, then (from) Victoria Street, and now here.

"Even if I've made memories here, I will have to forget them all because we are moving yet again."

A version of this article appeared in the print edition of The Straits Times on March 31, 2016, with the headline 'Counting down to the end of Rochor Centre'. Subscribe
Topics:
More
Whatsapp Linkedin FB Messenger Telegram Reddit WeChat Pinterest Print Purchase Article Copy permalink