Murali, Chee, spend the day to rest and recharge with family and party members

Up to 25,727 Bukit Batok residents will go to the polls today to elect a new MP, after having had some time to reflect on the by-election campaign and mull over their decision on Cooling-off Day yesterday.

The cooling-off period also meant both candidates - Mr Murali Pillai, 48, of the People's Action Party (PAP) and Dr Chee Soon Juan, 53, of the Singapore Democratic Party (SDP) - could rest and recharge after nine days on the hustings.

Polling stations have also been set up at 10 Singapore missions abroad for the 52 eligible Bukit Batok voters to cast their ballots.

The seat for Bukit Batok SMC was vacant following the resignation of its PAP MP David Ong on March 12 over allegations of an extramarital affair with a fellow party member.

Since the hustings began on April 27, both candidates have gone out to win hearts and minds. 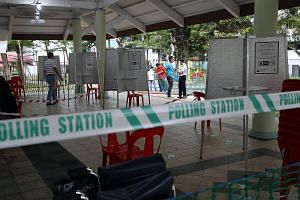 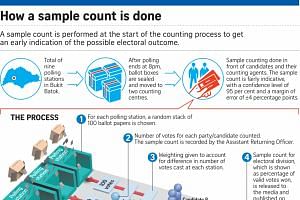 ELD to give sample count of the votes

Mr Murali of the PAP said he would do his best to make Bukit Batok a better place for its residents, while Dr Chee, secretary-general of the SDP, said he would speak up for Singaporeans in Parliament.

Yesterday, both men used the cooling-off period to bond with party activists and family members.

Mr Murali had a zi charlunch at a coffee shop in Jurong West with party members from the PAP Bukit Batok branch. He had met representatives of some voluntary welfare organisations earlier on in a nearby block to discuss collaborations, he told reporters.

The head of commercial litigation at law firm Rajah and Tann also had breakfast with his family - something he has not had time to do when the campaign was in full swing. He is married to geography teacher N. Gowri and they have four children. "The nine days have been rather intense so I took time to catch up with my family and had breakfast with them," he said.

"All these things are happening outside Bukit Batok. We are closely observing the cooling-off rules."

On the SDP side, Dr Chee, a father of three, and his party members laid out fruits, snacks, and drinks on mats for an afternoon picnic at the Botanic Gardens with some 30 party members and volunteers, including Dr Chee's wife Huang Chih Mei.

Dr Chee spent the rest of the day with his family, an SDP spokesman said. SDP has also got a police permit for supporters to gather at Bukit Gombak Stadium from 8pm tonight, when polls close, to await the result.

PAP is not organising a public gathering, but Mr Murali and his team will gather at the party's Bukit Batok branch for the result.