It addresses the lack of enforcement options for mediation, which currently prevents companies from using this dispute resolution method, they added.

"It will do this by making settlements resulting from mediation enforceable in countries ratifying the convention, and so potentially on a worldwide basis," Lord Mance told The Straits Times.

The New York Convention is a significant factor in the popularity of arbitration in commercial contexts over the recent decades, he said.

"The mediation convention should encourage the use of mediation as a speedy, cost-saving and often relationship-preserving means of dispute settlement, by giving parties who agree to mediation an assurance that any settlement will be widely enforceable," added Lord Mance, who is an arbitrator at 7KBW Barristers in London.

Nanyang Technological University Associate Professor Lum Kit-Wye added that the convention makes mediation enforceable in its own right without the need for re-litigation but the challenge is to persuade users that mediation is enforceable. 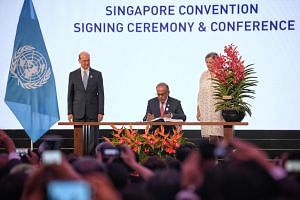 Two Singaporeans and a snowstorm help seal the deal

"We are already seeing a trend. There are countries or parties from different countries, and the dispute has nothing to do with Singapore, but they are bringing it here.

"When you ask them why, they say neutrality, confidentiality and a trusted system. That's what Singapore can offer."

He added that the new convention can result in better mediators and resources.

"We have very good support from the Government and the judiciary, and the private sector. So I see this as a real opportunity."

"If a disputes team builds a good reputation in representing clients in successfully settling cases through mediation, they should see more cases headed their way.

"Litigation has its risks and there appears to be a higher chance of a successful mediation than a successful verdict at trial. Lawyers and their clients may gravitate to the former."