SINGAPORE - Food and beverage (F&B) establishments had to turn away customers with fake vaccination certificates and some whose full-vaccination status were not yet valid, following the resumption of dining in on Tuesday (Aug 10).

Co-founder Eric Tan said several customers had shown up in pairs to dine in, having assumed that the non-air-conditioned restaurant is a coffee shop.

Only hawker centres and coffee shops are able to accept groups of two diners regardless of vaccination status.

Groups of up to five people who are fully vaccinated, have recovered from or tested negative for Covid-19, can dine together at restaurants.

"We had customers attempting to come in and who kept challenging us saying 'you have no air-con and no door, so you should be a coffee shop'," said Mr Tan.

"There were also others who didn't understand that if there is no green tick in your app, we can't let you in... one couple got really upset and stormed off after saying 'good luck to your business'."

The Straits Times spoke to 10 restaurants, bars and F&B groups, six of whom have had to turn away a handful of guests this past week.

Someone is considered to be fully vaccinated two weeks after he has received a full regimen of the Pfizer-BioNTech/Comirnatry or Moderna vaccines, or any other vaccines under the World Health Organisation’s Emergency Use Listing. These include the AstraZeneca, Sinopharm and Sinovac-CoronaVac vaccines.

A green tick in the app denotes that the person has completed the full regimen.

Venues can also admit those who have received a negative result on a $20 pre-event test by a Ministry of Health-approved Covid-19 test provider in the last 24 hours.

The Empire Eats Group, which owns eight brands of restaurants and bars including Standing Sushi Bar, Tanuki Raw and The Secret Mermaid, had guests who did not understand the requirements, and even some who tried to hoodwink their staff.

"We encountered some people thinking they can dine-in while unvaccinated if they are in a group of two; we also had a small number of people who presented fake certificates or insisted they're fully vaccinated before the 14-day milestone," said the group's director, Mr Howard Lo.

Both cases occurred at the Odeon Towers branch of Standing Sushi Bar.

One used a doctored HealthHub printout paired with a vaccination card that belonged to a person of a different name. Another was a group of five diners, one of whom later gave the restaurant a fake negative review online.

"When caught, they left willingly, but they were unhappy," said Mr Lo.

On Aug 11, Health Minister Ong Ye Kung warned against using another person's vaccination certificate in order to be allowed to dine at restaurants.

He added that the authorities will take enforcement action, with offenders risking a severe penalty.

Stickers for vaccinated diners at some foodcourts; only takeaway food for the unvaccinated

ST has contacted the authorities for clarifications on enforcement and the subsequent penalties.

Both 87 Just Thai and Empire Eats restaurants have posters clearly explaining the dine-in rules at their outlets.

But they are also concerned about the repercussions on their businesses if cheats slip through the cracks.

"The authorities have demonstrated that they will mete out severe penalties to the restaurant for any infraction, even if it is out of the restaurant's control.

"We do not want any chance of being shut down for 10 days, so we enforce the rules strictly," said Mr Lo.

askST: If I am not vaccinated but have tested negative for Covid-19, can I eat in a restaurant?

askST: How can I prove to restaurants that I have recovered from Covid-19?

Mr Tan is also concerned about losing customers, especially when businesses are struggling to recoup losses after a number of shutdowns.

"They could have become our regular customers but because of an unpleasant incident (of being turned away), they are possibly never coming back again," he said.

"But there were also some very nice customers who came very well prepared and we really appreciate them."

Diners at malls ST visited over the weekend were familiar with the rules.

Northpoint City in Yishun and Ion Orchard were fairly crowded on Saturday, with many in groups of three and four.

Most F&B outlets were at least half full, with staff stationed at the front checking customers' vaccination status.

While dining in has resumed, fast-food chains like Burger King and KFC have chosen to keep selected outlets open for takeaway only instead of reopening for dine in.

Six KFC outlets, including those in Bugis Junction and Bedok Reservoir Road, are open only for takeaway.

Diners too are aware of businesses choosing to limit the size of groups dining in.

"I know that some shops still allow only two people but that's just a small handful. It's unlikely that you go into a mall now and you can't find a single shop that will accommodate you," said university student Gabriel Lim, 23, who dined at Ion Orchard.

While foot traffic has gone up, some retailers in malls are cautiously optimistic.

"Because (dining in) has just resumed, the hype is still there, so I think sales will gradually pick up, especially from Friday to Sunday.

"But it's hard to say how it will be in the long run, as we're still unsure if the rules may revert back to no dining in again," said Ms Melwani Erwan, 20, who works at stationery and accessories store Smiggle in Northpoint City.

Mr Kyle Lim, 27, who works at fashion label Charles and Keith in Ion, feels that the new rules come with some setbacks to the business as well.

"We will definitely have better sales if more people are allowed to dine in, but since only fully vaccinated people can dine in at malls, unvaccinated people may choose to not visit malls for now - and that is a rather significant loss of potential customers," said Mr Lim.

Covid-19 restrictions are slated to be eased further come Aug 19, including increasing permitted event sizes and capacity limits for malls and attractions.

Up to 50 per cent of employees who work from home may also return to the workplace.

The requirement for temperature screening in public premises will also be removed.

Dine-in to resume, more can work from office: All about S'pore's rules easing from Aug 10 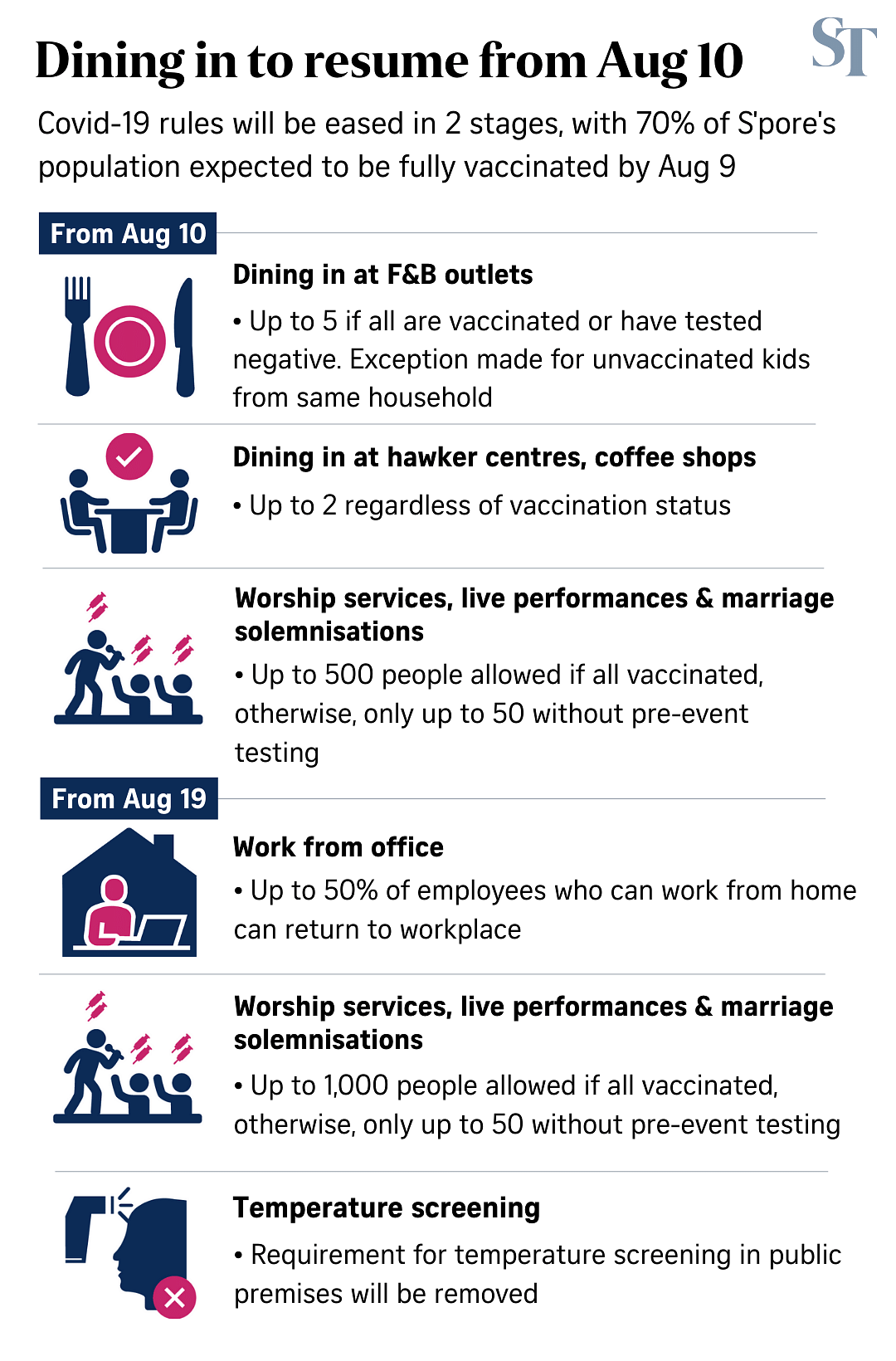