SINGAPORE - Foreign workers who are confined to their dormitories for the next two weeks can rest assured that their salaries will be paid and their food and medical needs will be attended to, said Minister for Home Affairs and Law K. Shanmugam on Wednesday (April 22).

Speaking to reporters after a visit to Westlite Papan dormitory in the Jurong area, Mr Shanmugam said the purpose of his visit was to hear from the workers, to understand their concerns and to give assurance.

He said: "It's tough to be cut off and be in a room most of the time, but they understand. Their main request is they hope after this is over, they will be allowed to work in Singapore.

"Singapore is their destination of choice, and I said, we hope so too - that they can work here."

Mr Shanmugam, who spoke in Tamil and English to more than 70 workers, told them that the Covid-19 outbreak was happening in other countries as well and sought their understanding for the current measures being implemented.

He also asked the workers to report to the authorities if their employers do not pay them.

Also at the dialogue were Nominated MP Arasu Duraisamy, who is also NTUC secretary for financial affairs and general secretary of the Singapore Port Workers' Union, and Bangladeshi-born businessman Muhammed Aziz Khan, founder and chairman of the Summit Group.

The Westlite Papan dormitory currently houses about 5,700 workers. It has no confirmed Covid-19 cases so far. As of Tuesday, 28 out of the 43 purpose-built dormitories have known clusters.

On Tuesday, the Ministry of Health said that workers in all dormitories will no longer be allowed daily movement in and out, including going to work, until May 4. About 10,000 workers in essential services have already moved out of dormitories to alternative accommodation. 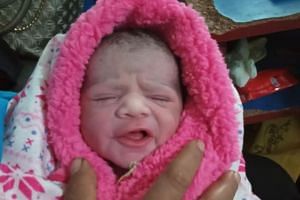 Coronavirus: Bangladeshi worker, whose wife gave birth to baby boy, out of ICU after more than 2 months

Speaking to reporters, Mr Shanmugam said that other than their salaries, workers might be concerned about medical support and their living conditions.

"I said look, if you're not well, please report sick. We are aggressively testing even those who are asymptomatic. But please report and you will be taken care of," he said, giving the example of Singapore's 42nd Covid-19 patient, a 39-year-old Bangladeshi worker who was transferred out of the intensive care unit after being there for more than two months.

He noted that workers said they had no issues with their food when asked and that Wi-Fi connectivity has been boosted so that they can contact their families regularly.

Asked about the case of a work pass holder who was stripped of his pass for breaching circuit breaker measures earlier this month, Mr Shanmugam said: "I think the message has to go out very clearly, that if you breach the rules, very severe action will be taken. We want to stop the spread and everyone has to observe the rules."