SINGAPORE - Two women entrepreneurs who blazed a trail in men-dominated industries have received the top awards presented annually by Her World magazine to outstanding women.

The duo received their awards on Friday (Aug 16) at a dinner attended by Manpower Minister Josephine Teo and held at Shangri-La Hotel.

Ms Chong, who is married with four children, started her company in 2002 when her youngest child was four years old.

It was not easy juggling home and work, she said, as she had to prove herself among a sea of men who had been in the business longer than she had.

"Men will test you to see if you are good enough, and when you prove you mean business, they will give you respect," she added.

Ms Chong recounted a time when she found a forklift was obstructing an exit.

She asked some workers to move it but they ignored her instruction. She climbed onto the forklift to do it, surprising them.

"After that, everyone knew not to mess with the boss," she said, chuckling.

Despite her tough exterior, she has a warm heart. She ensures her company has an inclusive culture, and employs former convicts as well as people with disabilities.

One of her workers, who has been with the company for about 10 years, is mute and deaf.

Ms Chong, along with about 20 members of her staff, picked up sign language from the staff member and learnt to communicate with her. They have become so proficient that "sometimes I can see them quarrel in sign language", she said.

She set up her company 17 years ago when she noticed that few businesses actively cared about being environmentally friendly and sustainable.

Today, multi-million dollar Greenpac which employs about 50 people, has won more than 50 enterprise awards and counts some of the largest Fortune 500 companies as its clients.

The award puts her in the company of such leading Singapore figures as President Halimah Yacob, who received the accolade in 2003, and Ambassador-at-large Chan Heng Chee, who is Chairman of National Arts Council and Chairman of Lee Kuan Yew Centre for Innovative Cities at the Singapore University of Technology and Design, in 1991.

While Ms Chong has made waves in the packaging industry, Ms Kwok is establishing herself in the artificial intelligence (AI) community globally.

Recipients of the Her World Young Woman Achiever award are women younger than 35 who have shown potential for attaining a higher level of success in their fields. 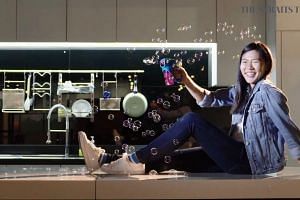 It Changed My Life: Founder of AI company is a technopreneur and a 'chiongster'

Ms Kwok was also among the 11 finalists for The Straits Times Singaporean of the Year 2018 award.

Her company, started in 2017, offers AI-driven solutions for multinational companies, and she aims to "recycle" some of the technology to benefit smaller tech companies by repurposing certain aspects to suit the different clients.

She hopes to do social good through technology, and improve the technical disparity as smaller companies struggle to keep up as technology advances.

Her vision is to make AI accessible, affordable and available to the larger community.

"I hope people will pause to think about how they can do things differently to optimise their existing role in their companies for social good," said Ms Kwok.

"It's a very fulfilling feeling when you help others, and definitely worth putting in that bit of extra effort to make the world a better place."