SINGAPORE - Do not be alarmed if you are asked to go through security screening at Jurong East MRT station on April 5.

This is part of a regular emergency preparedness exercise, called Exercise Station Guard, by the Land Transport Authority (LTA) and train operator SMRT.

In a joint release on Friday (March 22), the LTA and SMRT said all commuters entering the station that day will be directed towards the gates on the concourse level after exit A for security screening.

Some commuters may be asked to walk through a metal detector and have their belongings scanned by X-ray machines.

The LTA will also trial the effectiveness of new security equipment during the exercise, which will take place from 10am to 4pm.

In the statement, commuters were told to factor in additional travel time for the security screening.

They were also advised to avoid bringing bulky items, as these may require more time for screening. 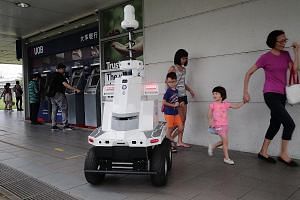 Robots could be rolled out for security patrols at MRT stations

The exercise is part of the national SGSecure movement to strengthen security in public places and build resilience in the community against security threats.

It also serves to raise public awareness of the security threats facing Singapore and familiarise commuters with how they should respond in the event of an emergency.